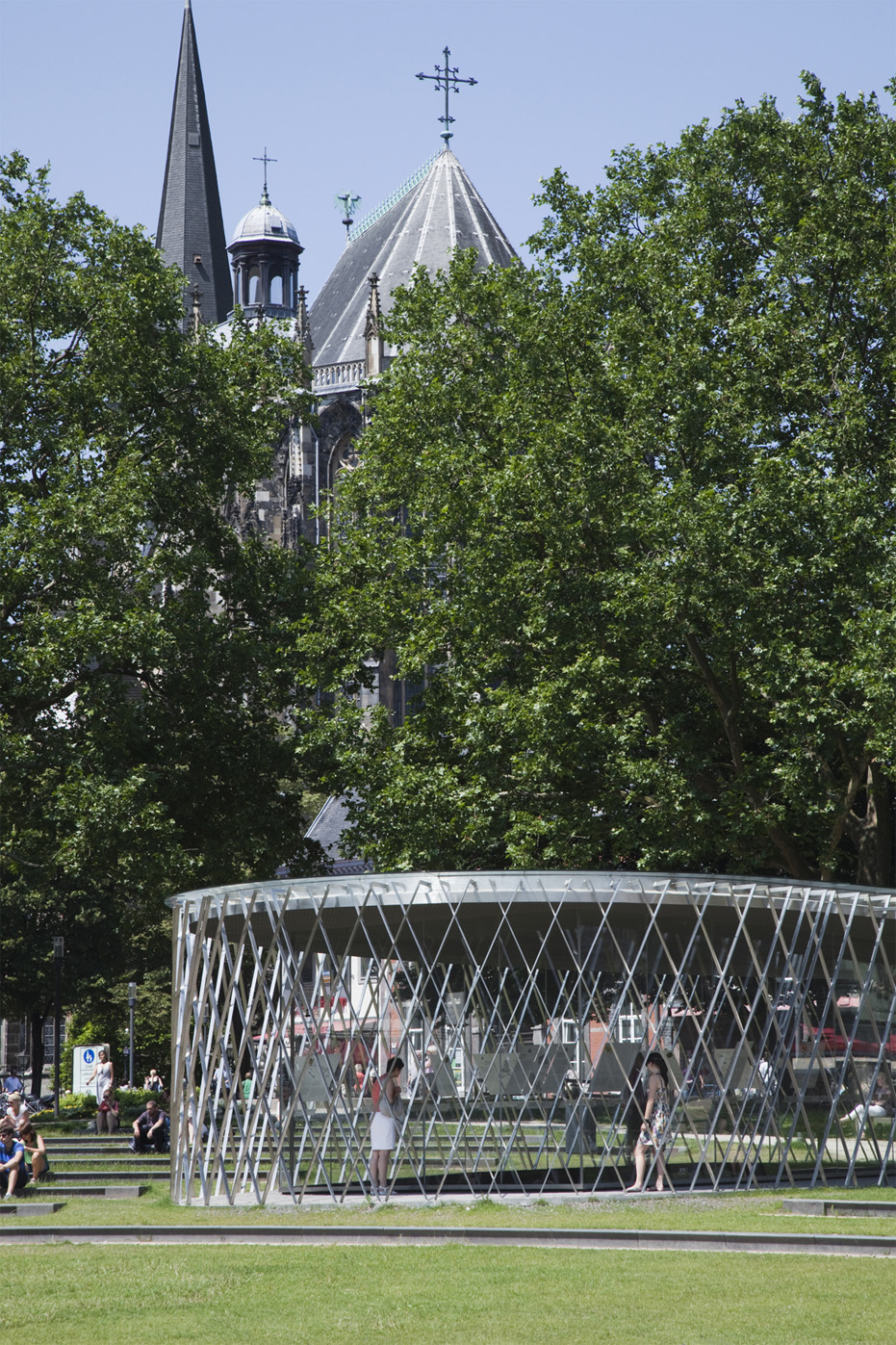 In the heart of Aachen, within view of its famed cathedral, is the city’s most beloved innercity park, the Elisen Garden. During extensive archeological excavations amazing discoveries were made: spanning from the Neolithic period (4700 BC) to the high and late Middle Ages (ca. 910-1500) there is evidence of all essential periods of the history of settlement in Aachen from the birth of Christ to the present. In order to preserve this discovery and so that the public can experience it, an area of 60m² was to be roofed with a protective shell, where two-meter deep excavations overlap. The architectural concept of the competition-winning design of the archaeological pavilion  parallels the particularity of the site – the layers of various settlement structures of several eras of urban history of Aachen find an echo in the design of a pavilion with multilayered elements. 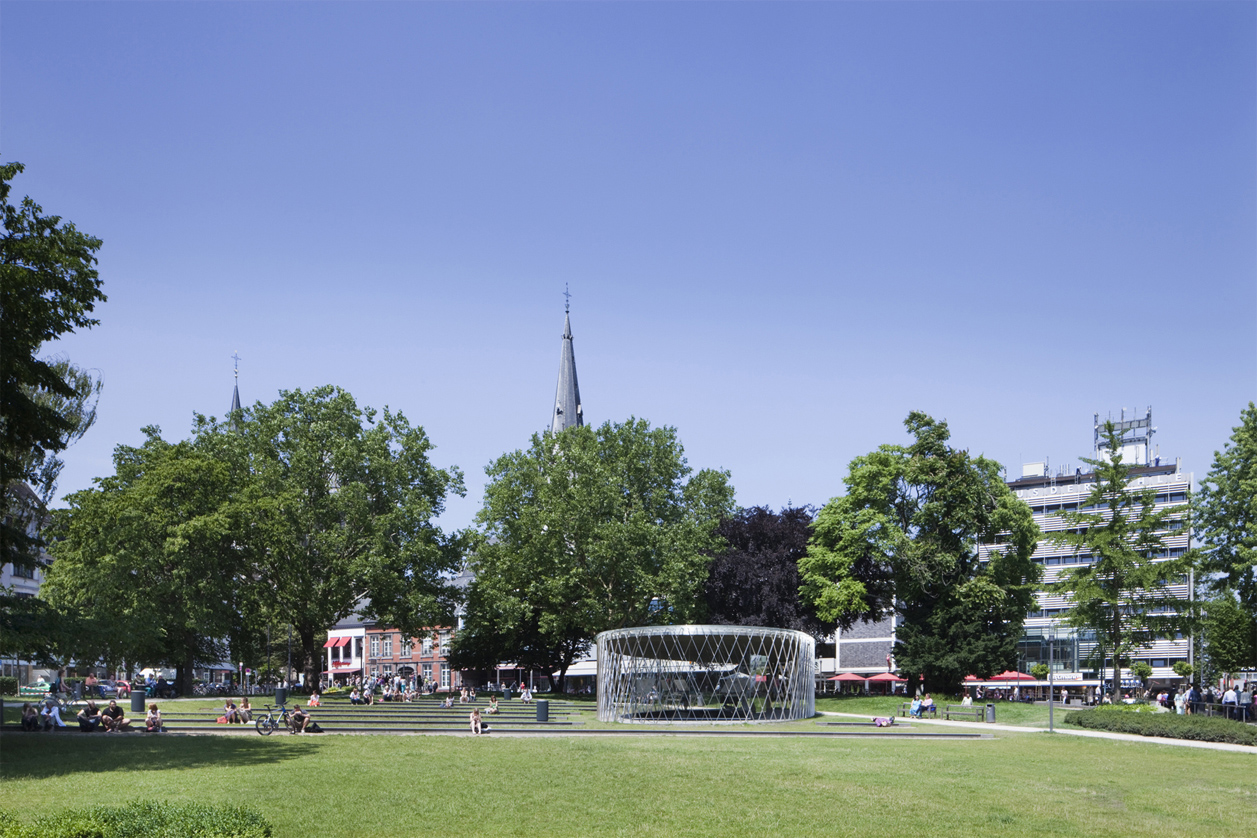 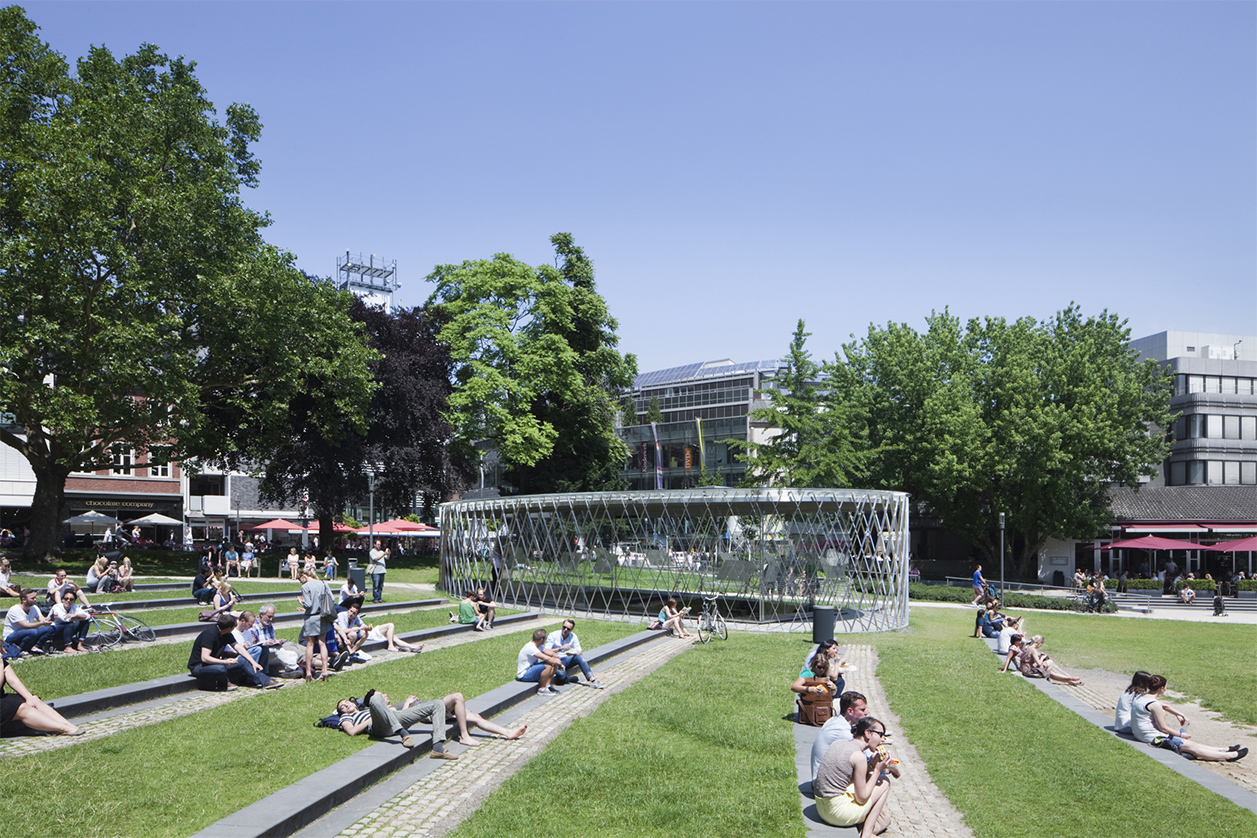 LAYERS AND THE IN-BETWEEN SPACE

With conscious dissociation from the common glass vitrines found throughout the urban context, a stainless steel construction encases the necessary glass enclosure. An exciting in-between zone is thus created, opening up to the surrounding park inviting one to rest or engage with the urban history – a contemplative refuge in the midst of urban bustle. The outside shell consists of two delicate layers of diagonally overlapping steel profiles. The inner vitrine provides the second shell in the form of a glassenclosure. It enables various perspectives of the excavation site, regulates the natural air flow, and protects the spectacular finds. At the same time it serves as a resource of information: a revolving timeline, a site map as well as a compact and clearly arranged illustration of the found structures and artifacts (printed on a light translucent film), informing the visitor without obscuring the vision of the site. 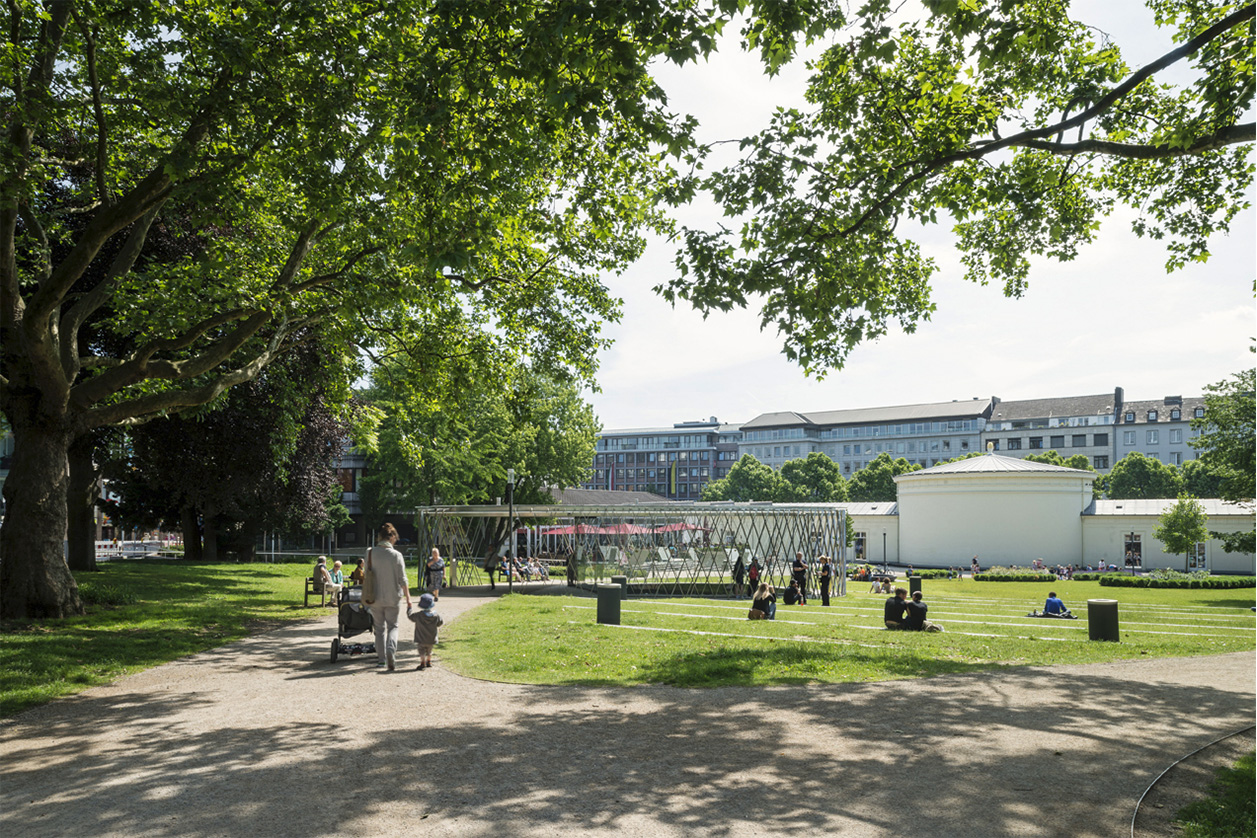 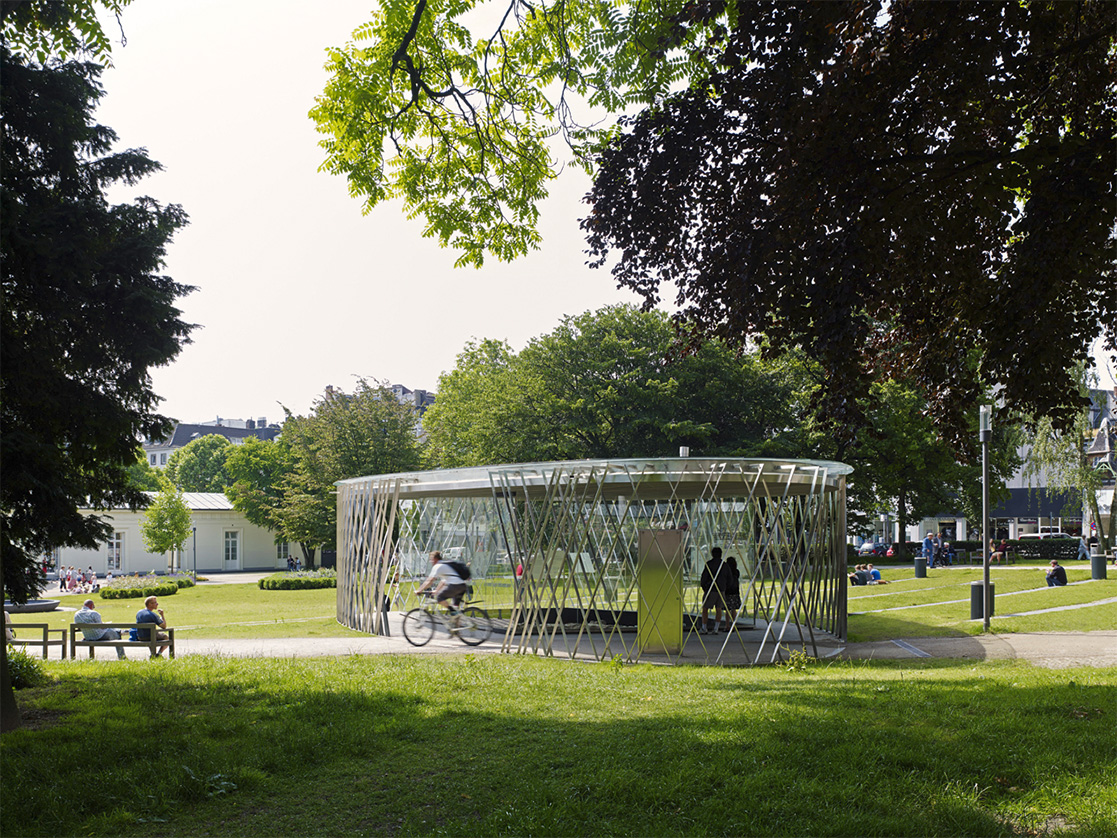 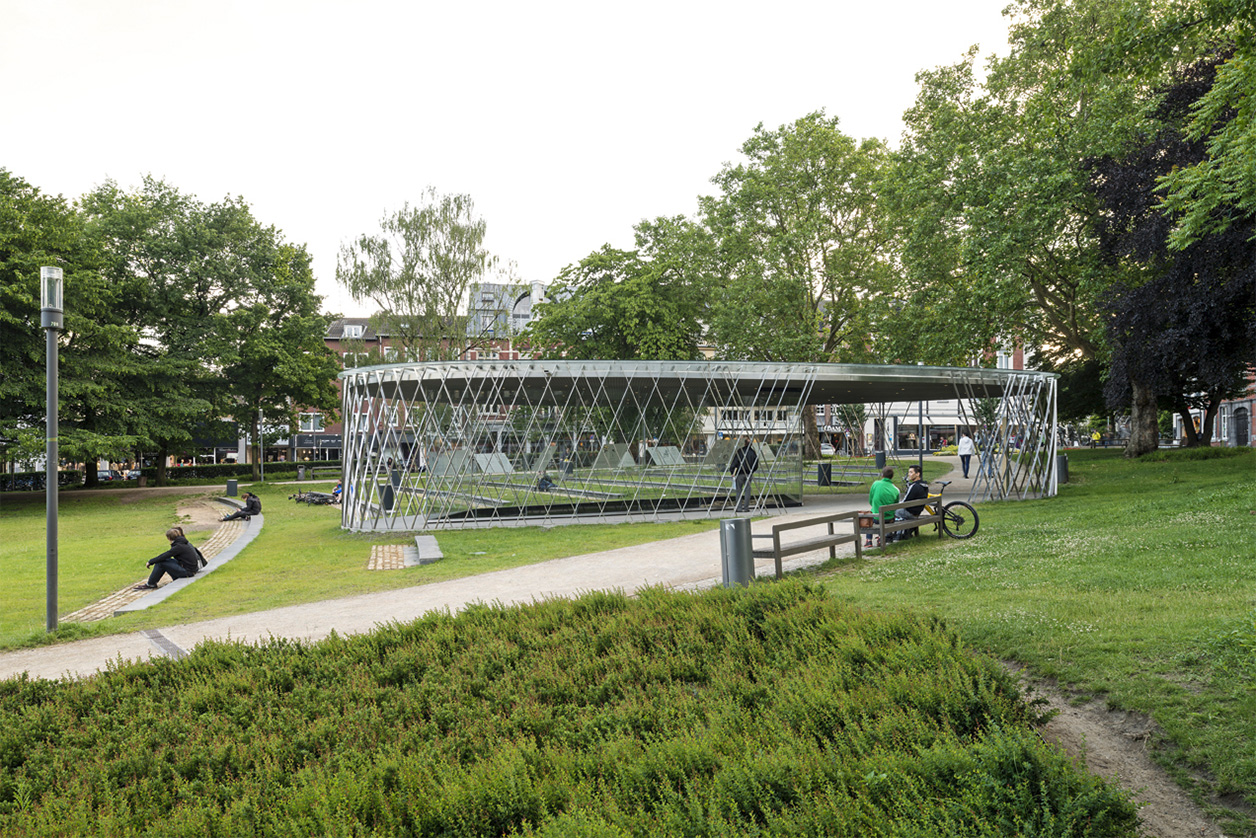 The archaeological pavilion clearly shows how important a small intervention can be to the inhabitants’ identification with their city. The exceptional interest of the public inthe history of their own city has been demonstrated by large numbers of who watched over the excavation tent with great curiosity, the many intrigued passers-by during the construction, and the surge of visitors since the construction was finished. The civic engagement of a company from Aachen who generously supported the construction of the archaeological vitrine (enabling it, indeed, to be built at all) demonstrates a laudable form of cultural sponsoring.  The project was mostly financed by the federal state of North Rhine-Westphalia with the firm DSA financing the city of Aachen’s share in the project. 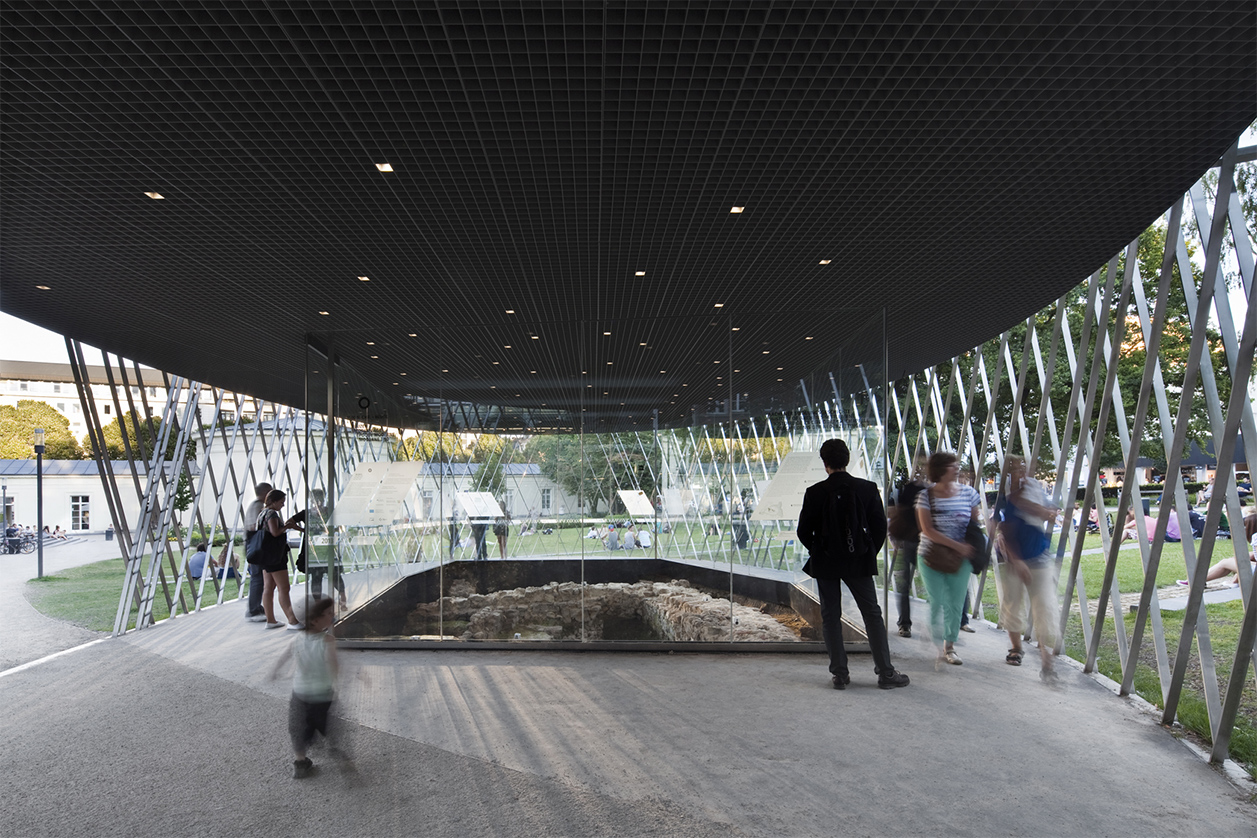 The site is an archaeological jewel in the historical center of the city. In order to make all the excavation results permanently visible, a number of “archaeological windows” can be found throughout the urban area. The archeological vitrine, as a direct structural intervention in the urban space, unveils the historic roots of the city of Aachen, and because of its weather-protected “in-between” room, it has become a common starting point for guided city tours. Furthermore, the vitrine has become¬¬ one of the stations on the “Charlemagne Route” highlighting the traces of Charlemagne throughout historically significant locations in the city. For more detailed information, see route-charlemagne.eu and archaeologische-vitrine.de. 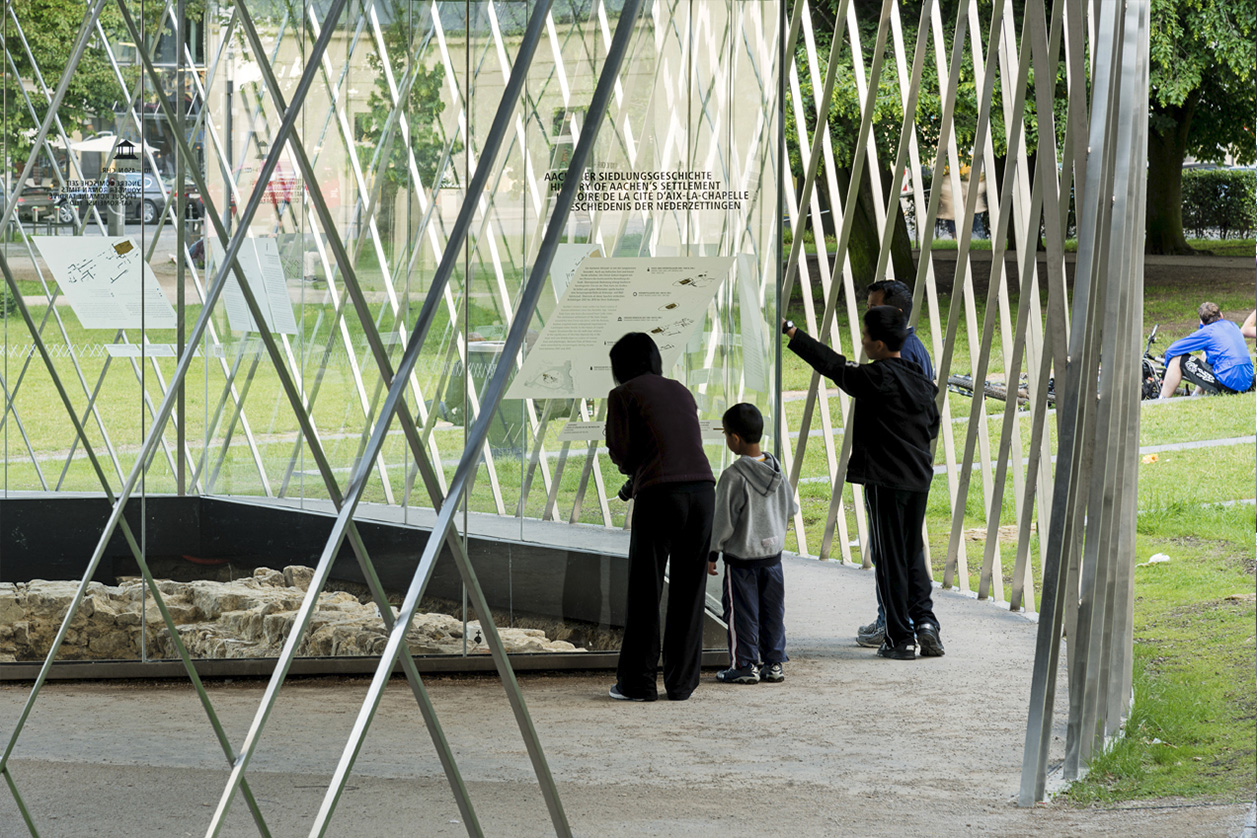 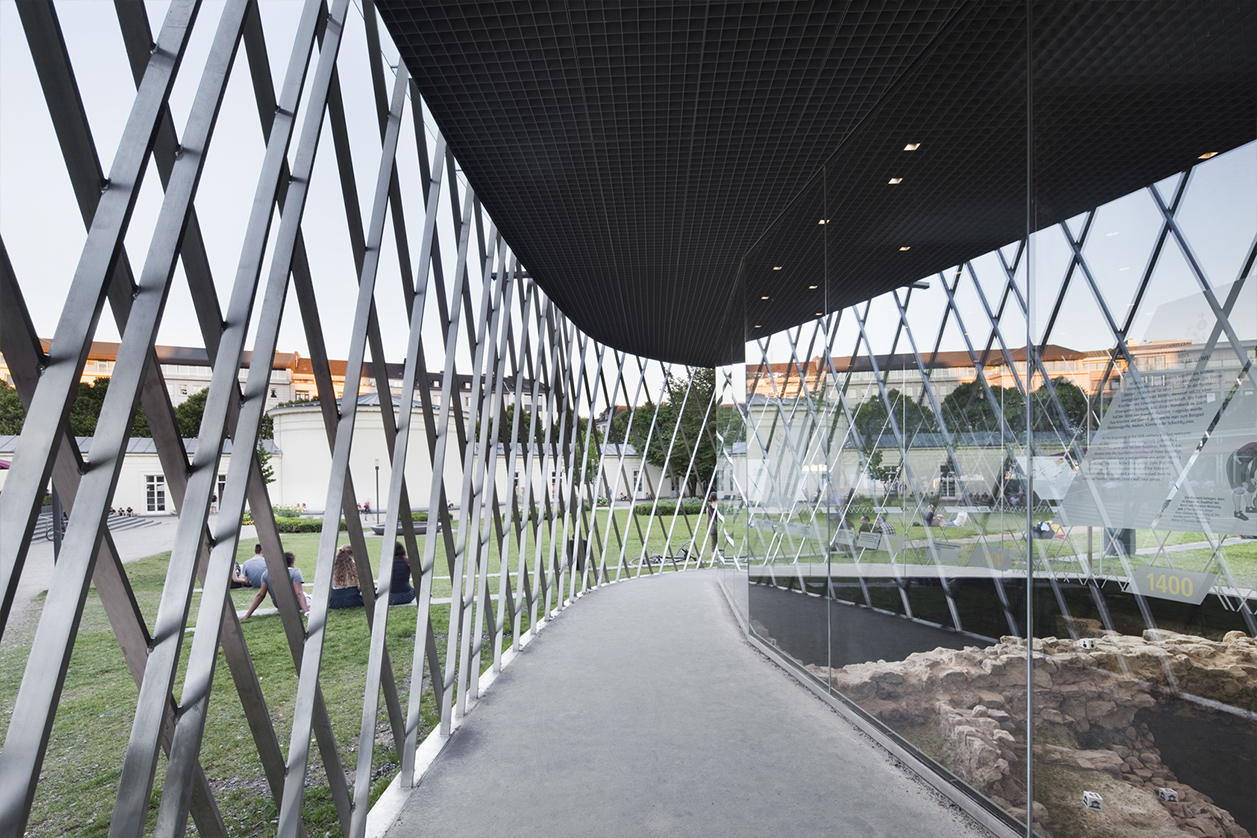 One of the structural challenges was to place the loads without interfering with the excavation site. The construction is mounted on 32 foundation piles (GEWI micropile). A floor grid of wide flange beams (HEB H-section) lies on the foundation piles. On top rests a trapezoidal profiled-metal formwork filled with concrete and covered with mastic asphalt. The outer shell of the pavilion is not only the essential form-giving element of the design but also serves as the primary structure for the column-free pavilion. It is manufactured from laser-cut solid stainless steel profiles. 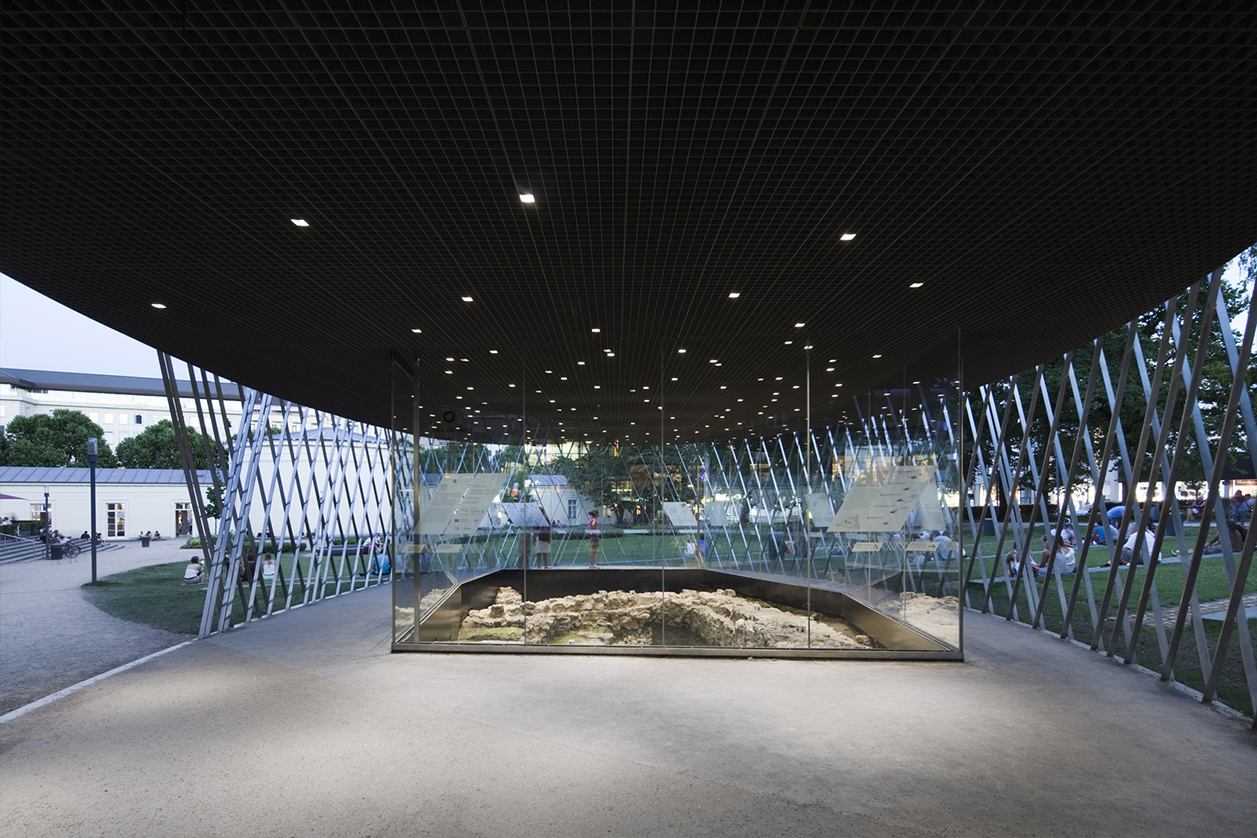 With a cross section of 50 x 15mm these are diagonally overlapped and welded together at the intersections. The roof construction consists of a steel frame with a steel grid underneath. The trapezoid sheet-metal shell is mantled with a roll-seam welded stainless-steel panel roofing, built without a slope. During the day, three skylights with light control louvres inside the horizontal glazing, provide a fine illumination of the site. In the evenings and at night, star-like LED-Downlights discreetly light the interior space and the finds. All visible parts of the steel construction are made of stainless steel. 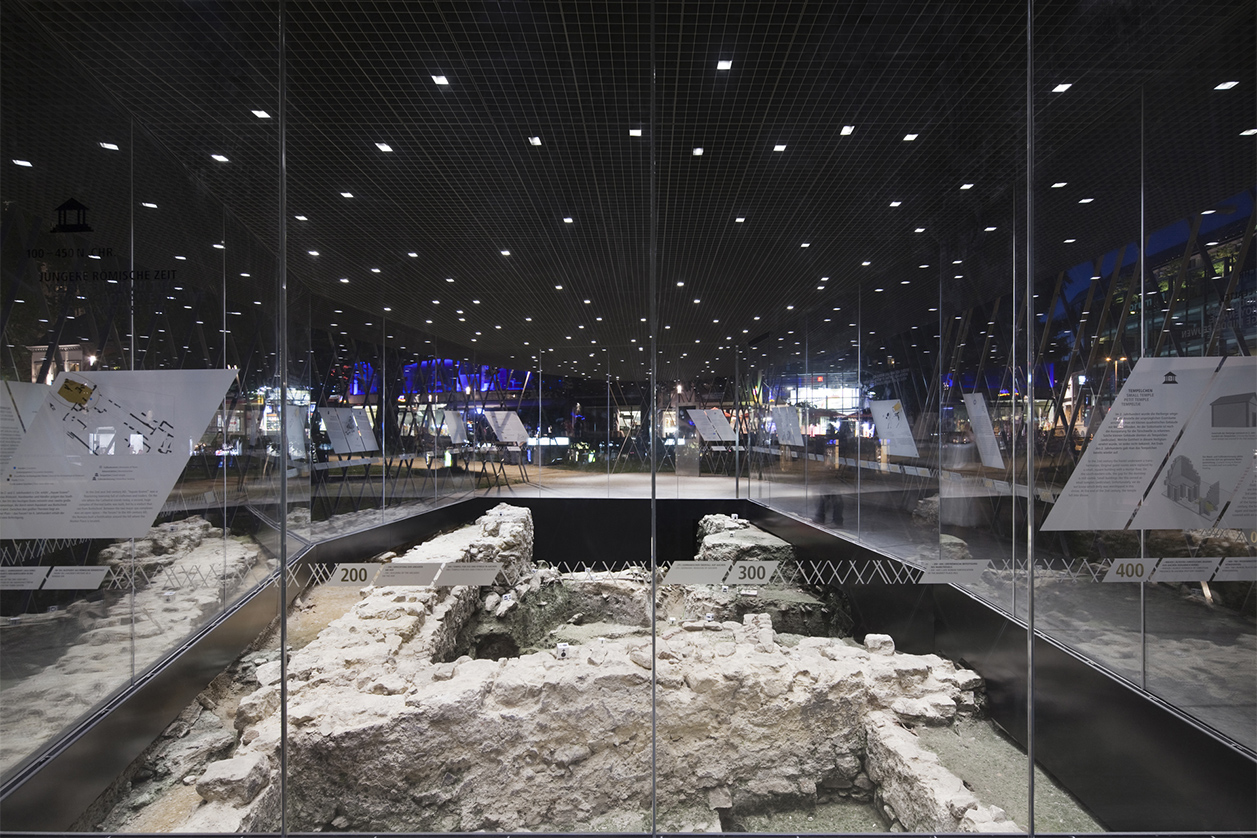 Altogether 12,3 tons of steel, 8,5 t stainless steel  (material V4a 1.4571 and duplex-steel 1.4462) and 150m²  VSG-glass were used. Because of the complex demands of the varied materials, the construction was manufactured and assembled off-site in a factory. The construction was then cut in four pieces and transported by heavy-load vehicles to the construction site and re-assembled. In order not to endanger the excavations during the assembly, the site was covered with sand and a temporary scaffolding was erected. 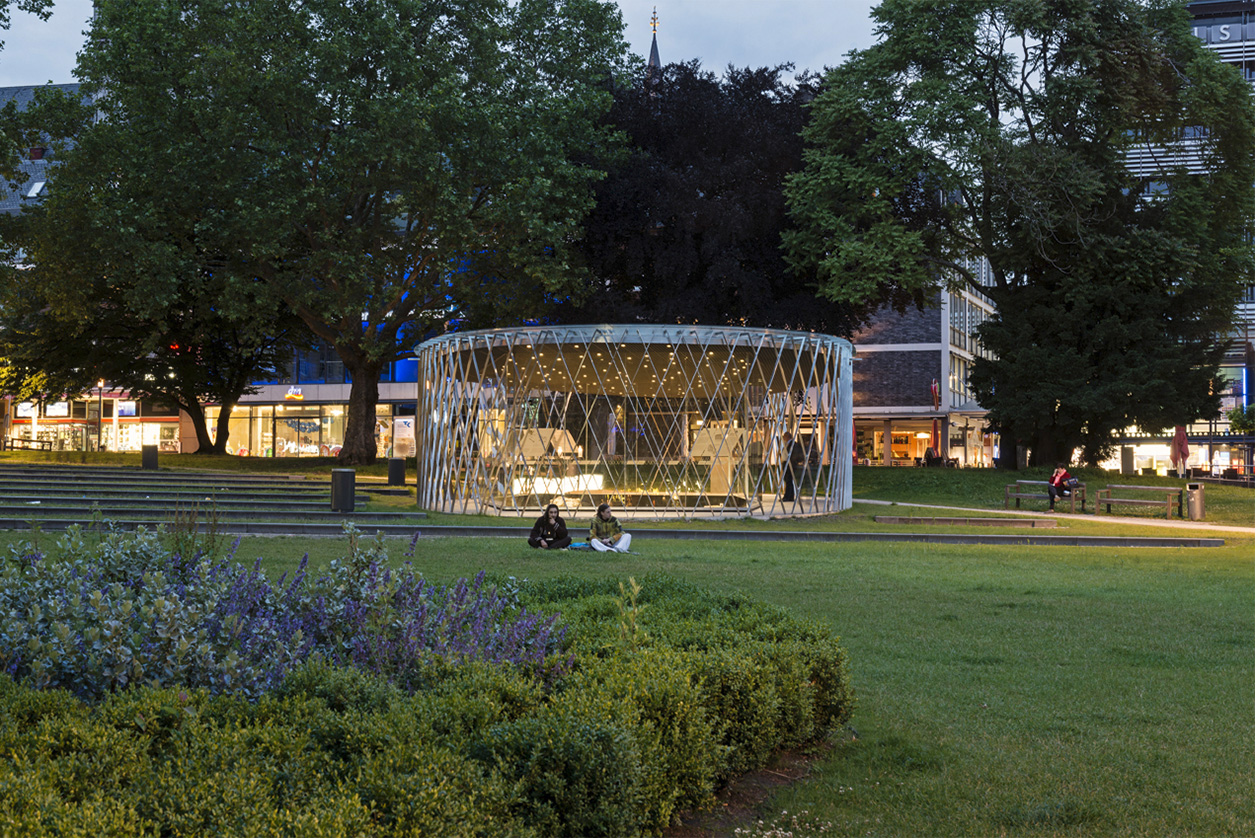 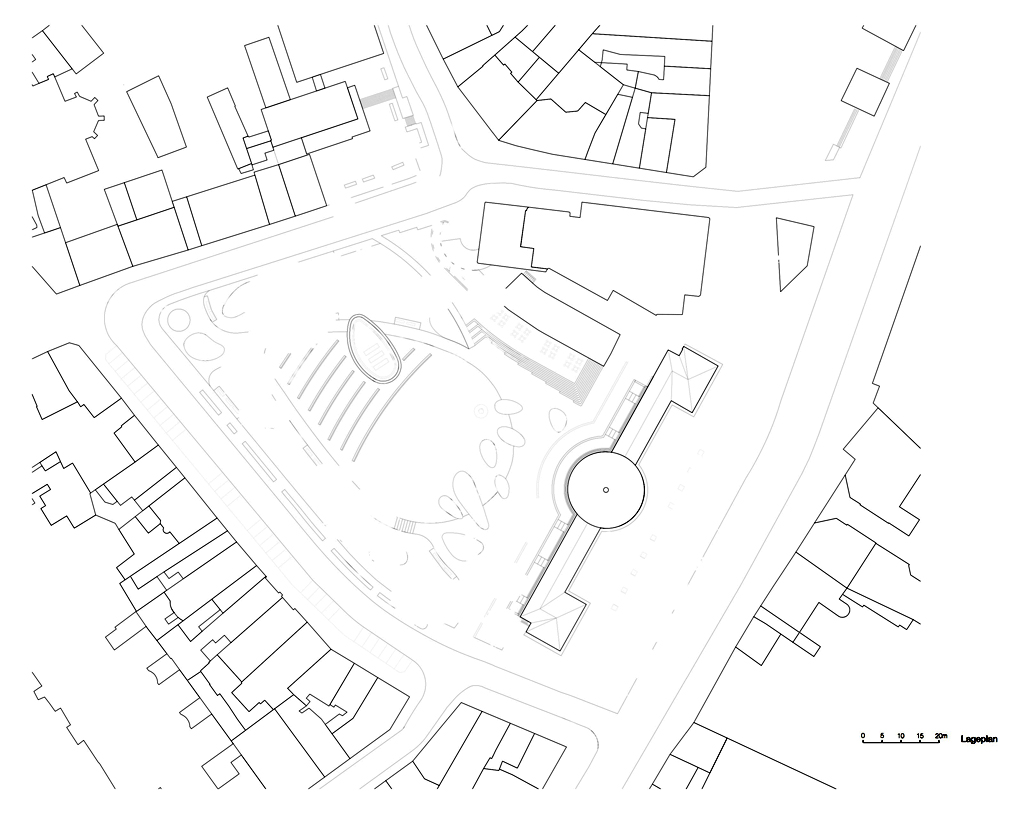 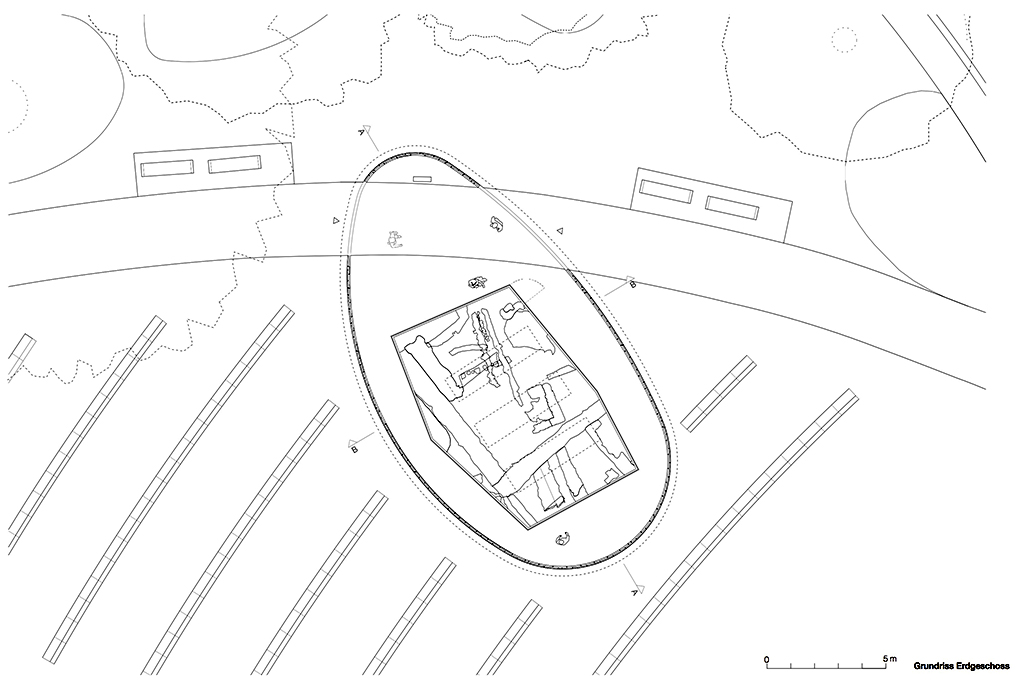 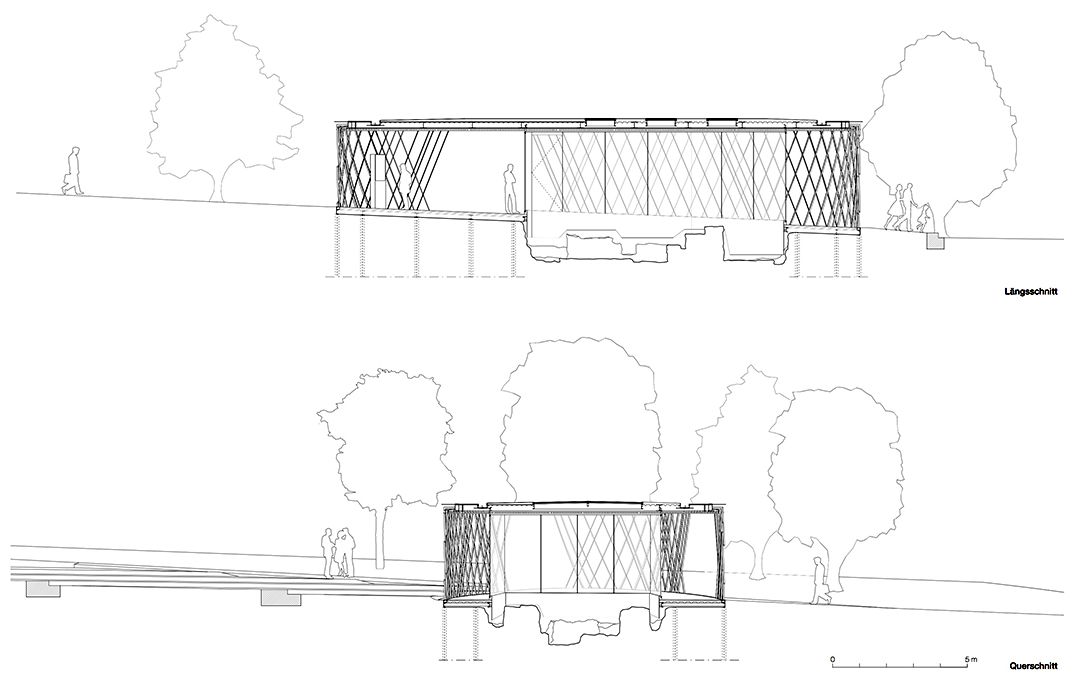 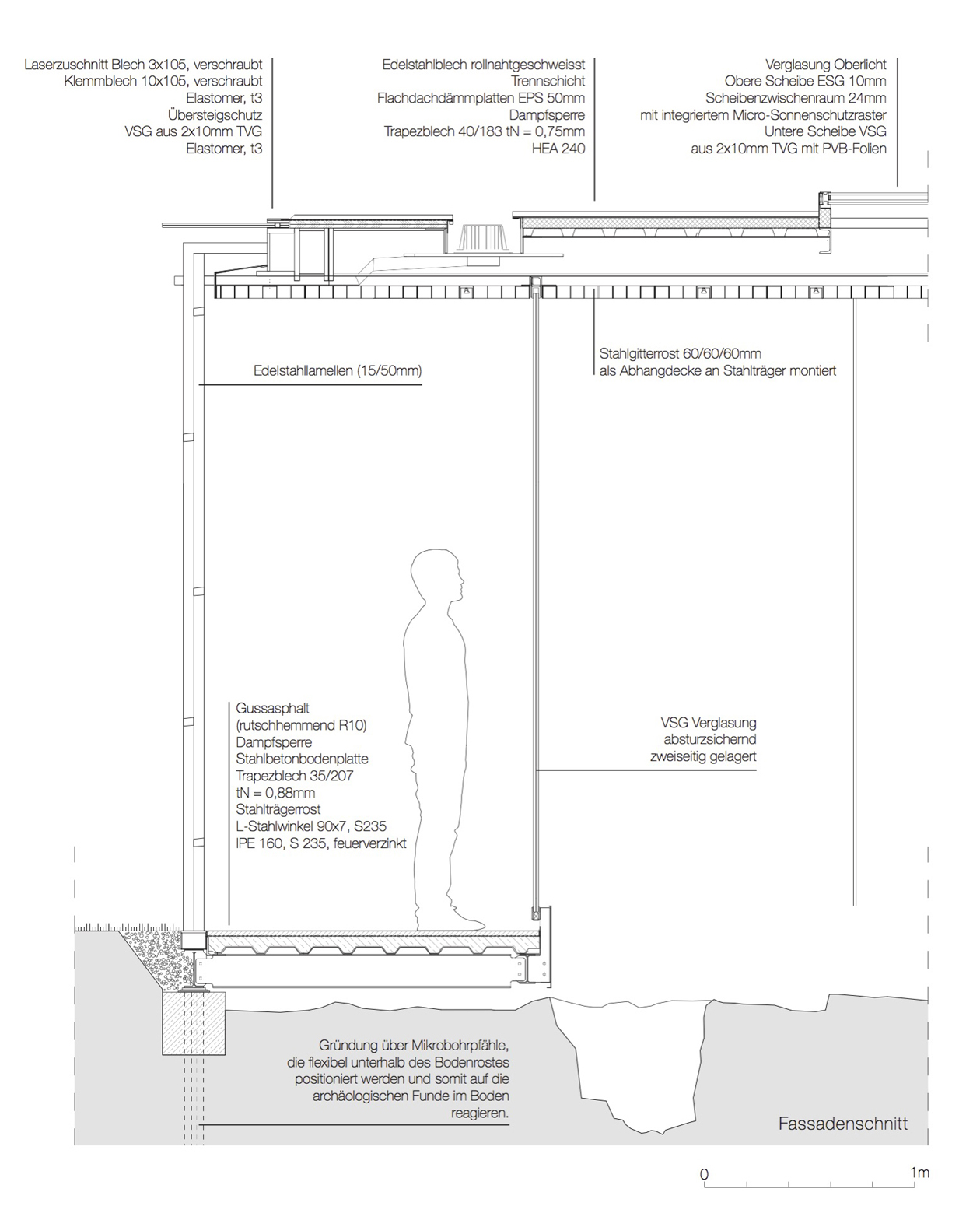 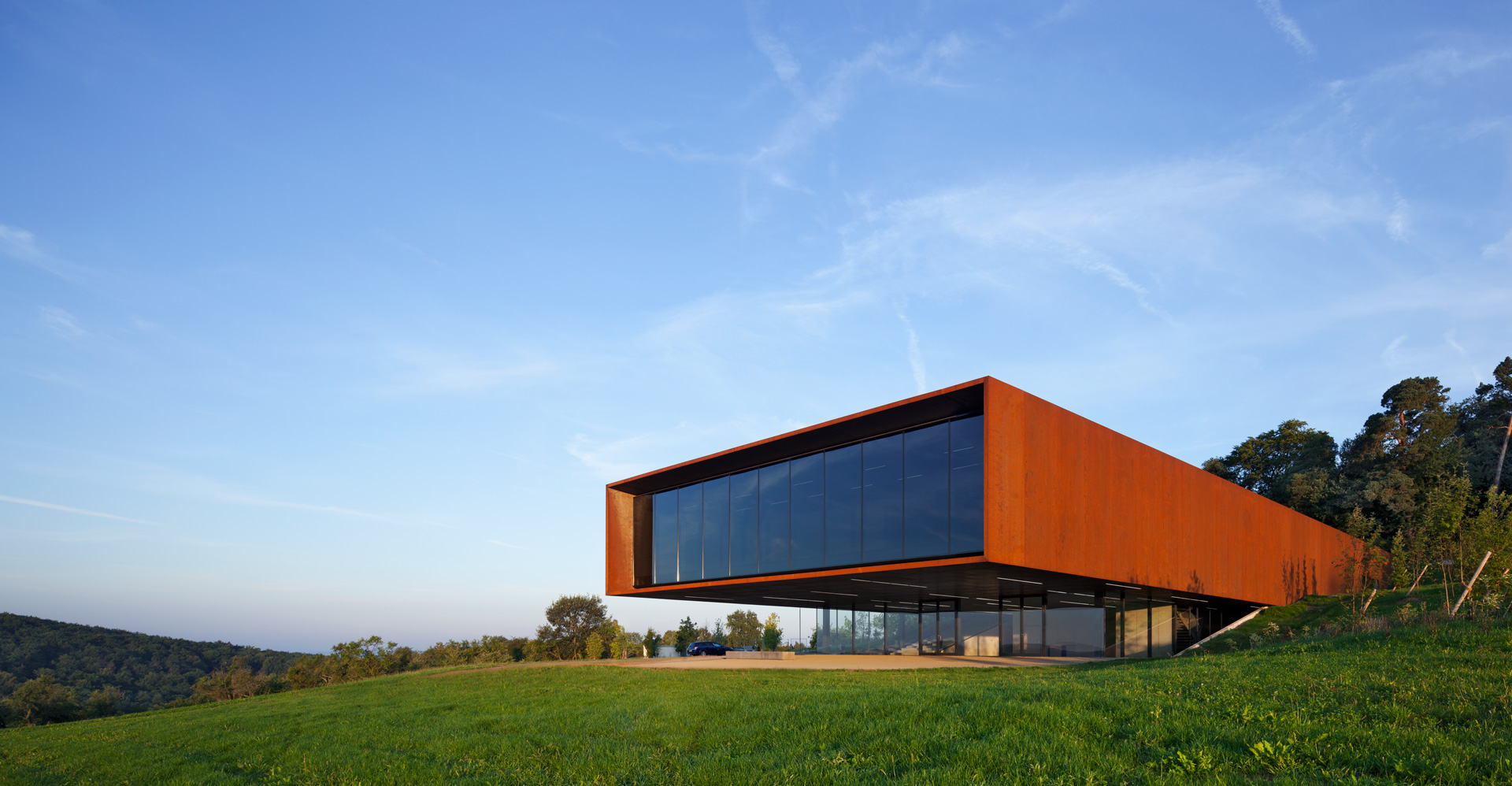 Celtic Museum Because of its strategic position and sweeping view, the plateau… 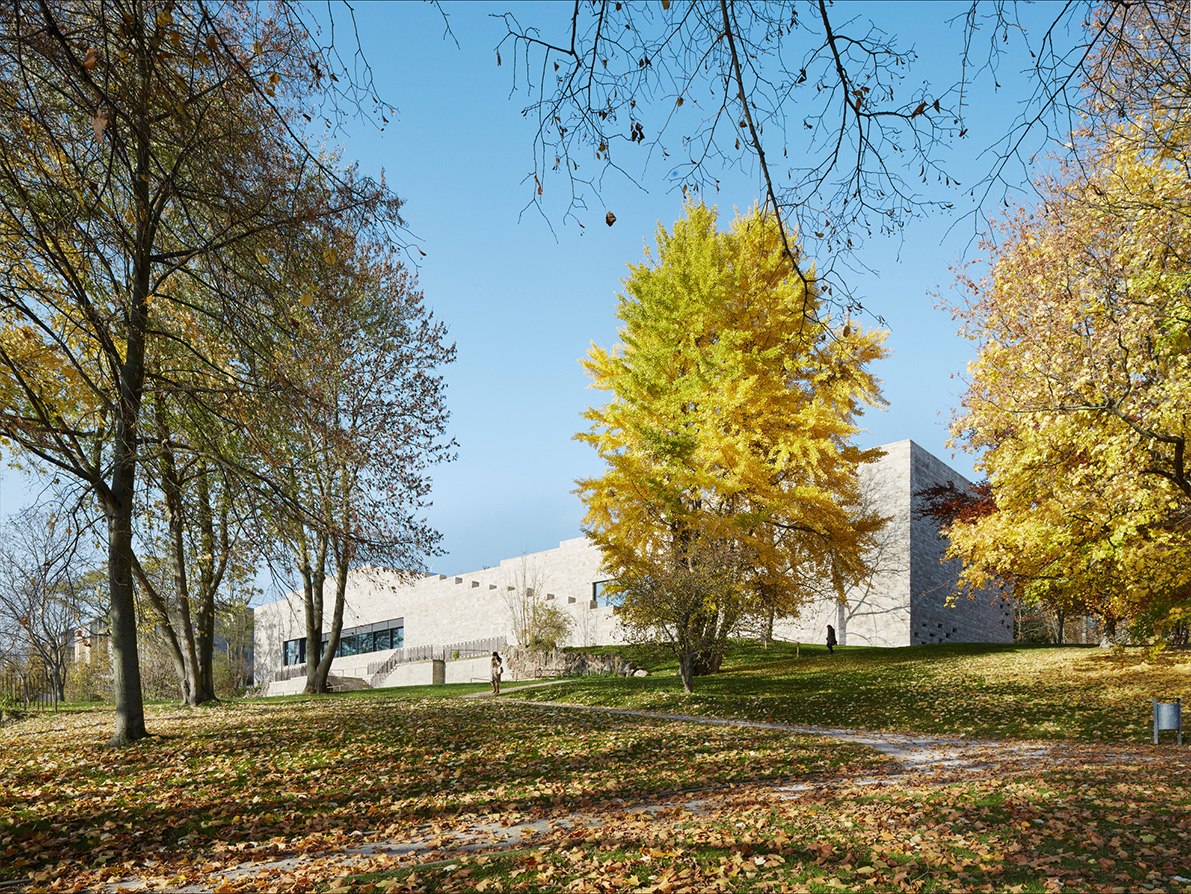 Originally founded in Aachen in 1999, we today stand for more than just architectural design. The interdisciplinary approach of our work, linking architecture, interior and product design on the one hand and at the interface of town planning and urban projects on the other hand, reflects the full range of our creative output.
FOLLOW
MESSAGE