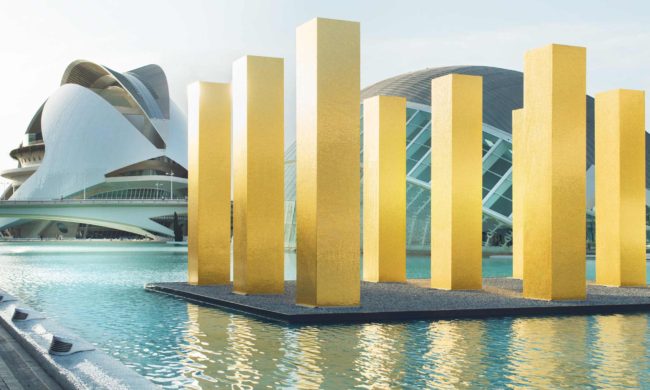 The City of Arts and Sciences of Valencia has on display until 6 November The Sky Over Nine Columns, an installation by German artist Heinz Mack, whose works have light as the central axis. Kosme de Barañano is the curator of this project, which consists of nine symmetrical columns, more than seven meters high each, coated with 850,000 golden tesserae.

The Sky Over Nine Columns was carried out by the Ralph Dommermuth Stiftung Kunst und Kultur Foundation in collaboration with Beck & Eggeling International Fine Art (Düsseldorf).

“For me, space is as important as sculpture […]. I cannot imagine one without the other.” With these words Heinz Mack stresses the importance of the location of his art works, reason why the first location of The Sky Over Nine Columns was on the island of San Giorgio Maggiore in Venice during the Biennale in 2014, to later be on display in the garden of sculptures of Sakip Sabanci in Istanbul. The chosen place this time, the southern lake of the Hemisfèric of the City of Arts and Sciences, in harmony with Santiago Calatrava’s architectural complex, is another ideal site in which to contemplate his light sculptures.

The column is the oldest element in the history of architecture, with a direct link between heaven and earth. It’s no coincidence that Mack has sought to place his work within an architectural complex in which wavy lines predominate and where the golden light of the columns reflect on the white of the buildings and the blue water, creating a unique luminous performance.

Heinz Mack has a great interest in exploring pure light in areas that have an unspoilt nature. In 1959, Mack outlined the so-called Sahara-Project, which took place in the African desert between 1962 and 1963. On several occasions, he installed an “artificial garden” in the desert formed by mirrors, cubes, posters and monumental trails of light. In 1968, these experimental practices on the force of light in different objects were documented in the film Tele-Mack. The result of these investigations are those that have led to the The Sky Over Nine Columns installation.

During 60 years, Heinz Mack (Lollar, Germany, 1931) has worked as a painter and sculptor. In 1958 he co-founded the ZERO Group with Otto Piene and Günther Ueker, which later led to an international movement joined by Yves Klein, Lucio Fontana and Piero Manzoni. The Guggenheim Museum in New York in 2014 dedicated an important exhibition to this postwar German group, following in the footsteps of other major exhibitions held in Amsterdam, Berlin and Istanbul.

Mack, along with other German artists, represented Germany in 1970 at the 35th Art Biennale of Venice. Since the early 50s he has developed a genuine artistic language based on light and colour, becoming one of the highest exponent of kinetic art. Currently, he lives and works in Mönchengladbach and the island of Ibiza.

He lives and works in Mönchengladbach and the island of Ibiza.

To date Heinz Mack’s work has been presented in the context of over 300 solo exhibitions and numerous group exhibitions. His works are in 136 public collections. Numerous books and catalogues, along with two films, document his artistic production.

Heinz Mack’s complete works has extraordinary versatility: sculptures in various materials, including monumental outdoor versions, trails of light, reliefs and light cubes. Among his paintings we recall, for example, the painting titled Dynamische Strukturen (Dynamic Structures) of period ZERO from 1957 to 1966, or from 1991 his paintings in increasingly larger format and always with more intense colours, called Chromatische Konstellationen (Chromatic Constellations). Along with drawings, pastels, graphic artwork, abstract photographs in black and white or handmade polychromatic by Diasec method. Mack has reorganised squares and public spaces, plus church interiors. His production also features stage design and mosaics.