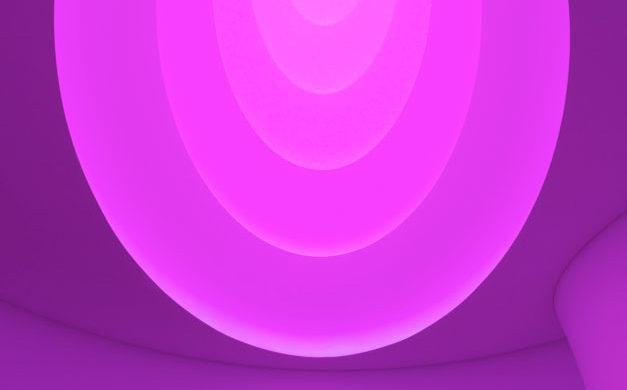 From June 21 to September 25, 2013, the Guggenheim Museum presents James Turrell, the eminent American artist’s first solo exhibition in a New York museum since 1980. The exhibition features a major new site-specific work, Aten Reign (2013), which represents one of the most dramatic transformations of the museum ever conceived—reimagining the rotunda of Frank Lloyd Wright’s iconic building as one of Turrell’s luminous and immersive Skyspaces. Opening on the summer solstice, the installation will fill the museum’s central void with shifting natural and artificial light and intense, modulating color, creating a dynamic perceptual experience that exposes the materiality of light. Including select early works in addition to the monumental new installation, James Turrell considers the dominant themes explored by the artist for nearly fifty years, focusing on his investigations of perception, light, color, and space and the critical role of site-specificity in his practice. 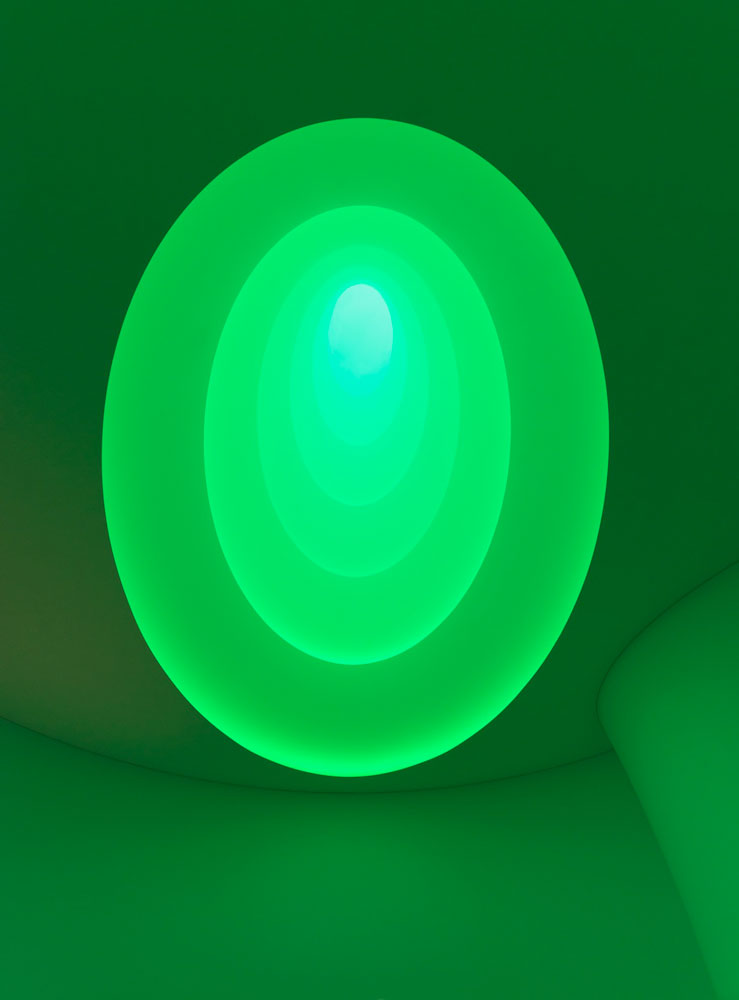 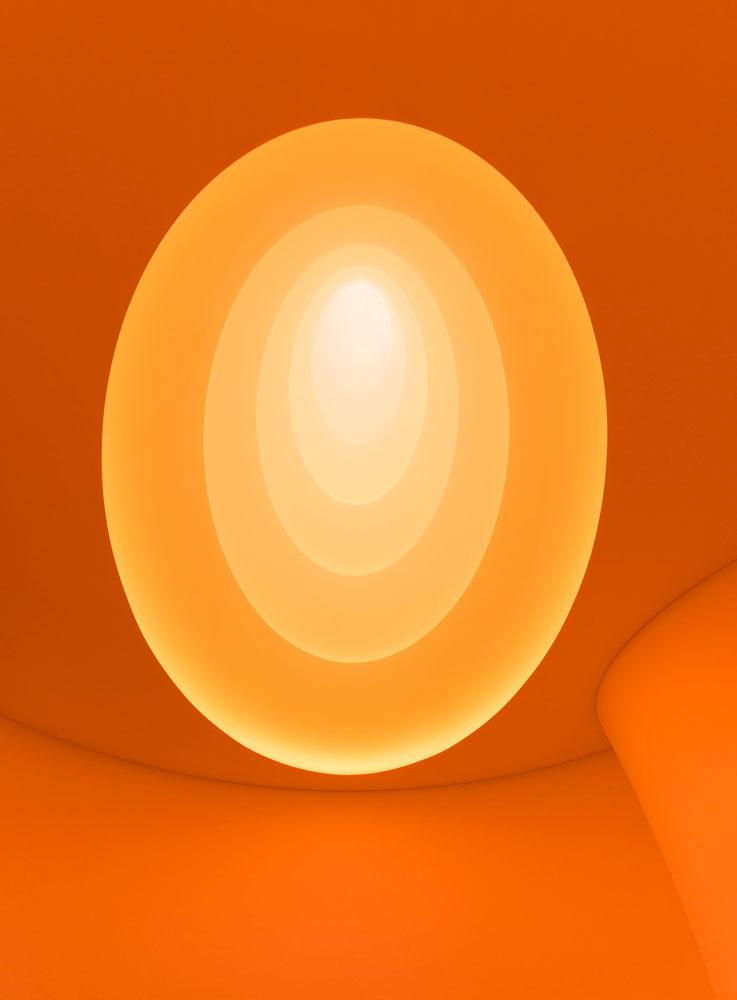 Since the late 1960s Turrell has conceived a wide-ranging yet unified body of work that explores his specific aesthetic concerns: the use of light as a material that affects the medium of perception; a refined formal language based in geometry; an interest in the optical and emotional effects of color; an interplay between the solid and the ethereal; and an emphasis on quiet, almost reverential atmospheres of introspection and reflection. Building on his early research into sensory deprivation—in particular the Ganzfeld effect, in which viewers experience disorienting, unmodulated fields of color—Turrell pursues a state of reflexive vision that he calls “seeing yourself seeing,” in which one becomes aware of the function of one’s own senses and of the material aspects of light. 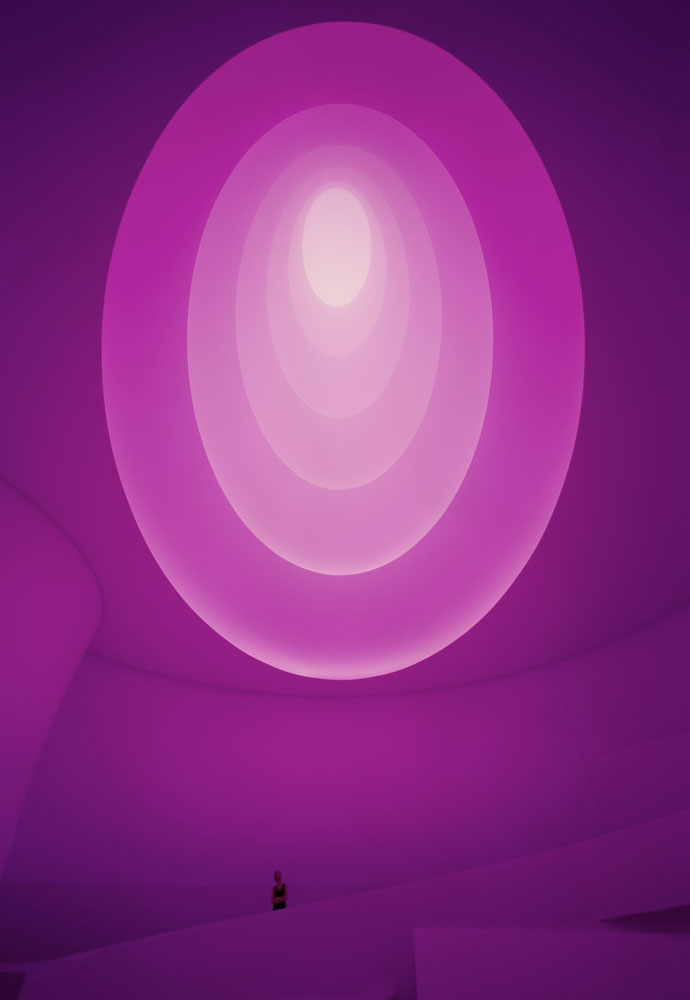 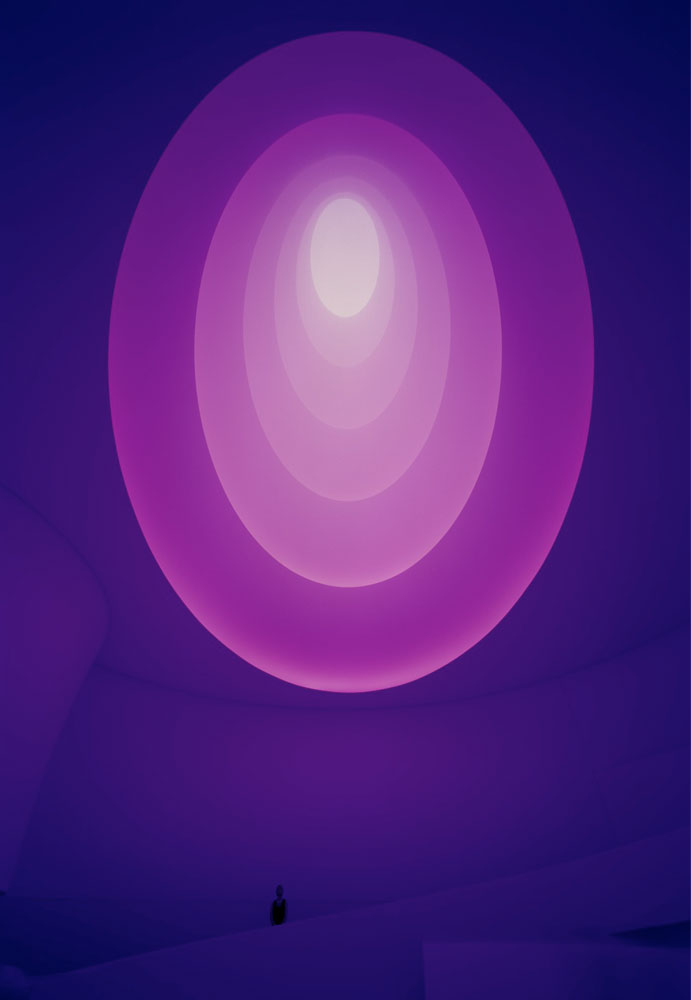 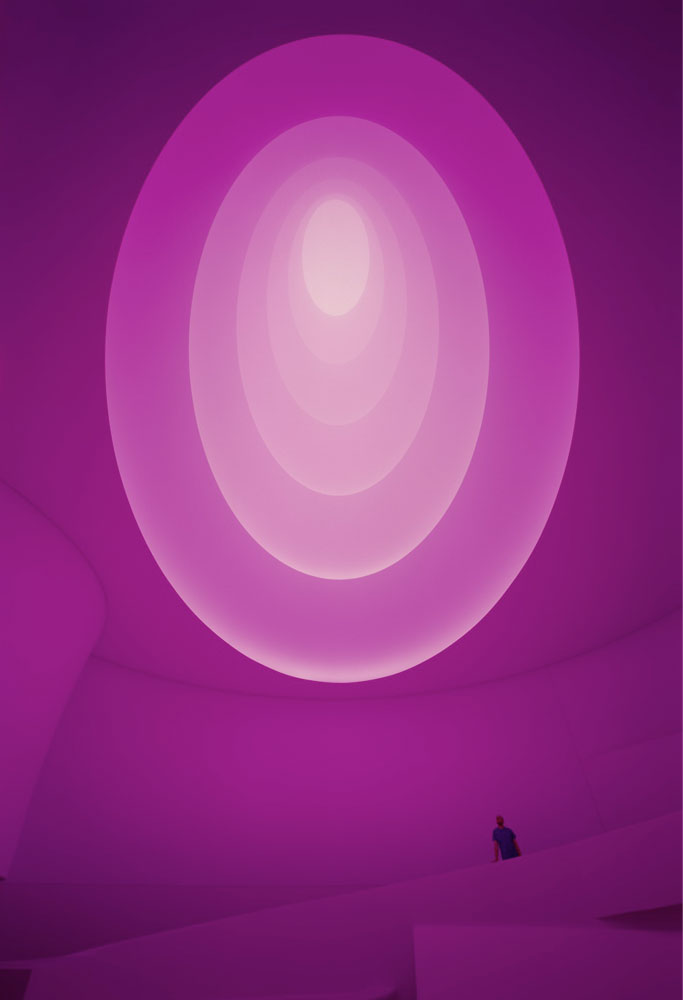 “Light is a powerful substance,” Turrell explains. “We have a primal connection to it. But, for something so powerful, situations for its felt presence are fragile. . . . I like to work with it so that you feel it physically, so you feel the presence of light inhabiting a space,” he says. “My desire is to set up a situation to which I take you and let you see. It becomes your experience.” 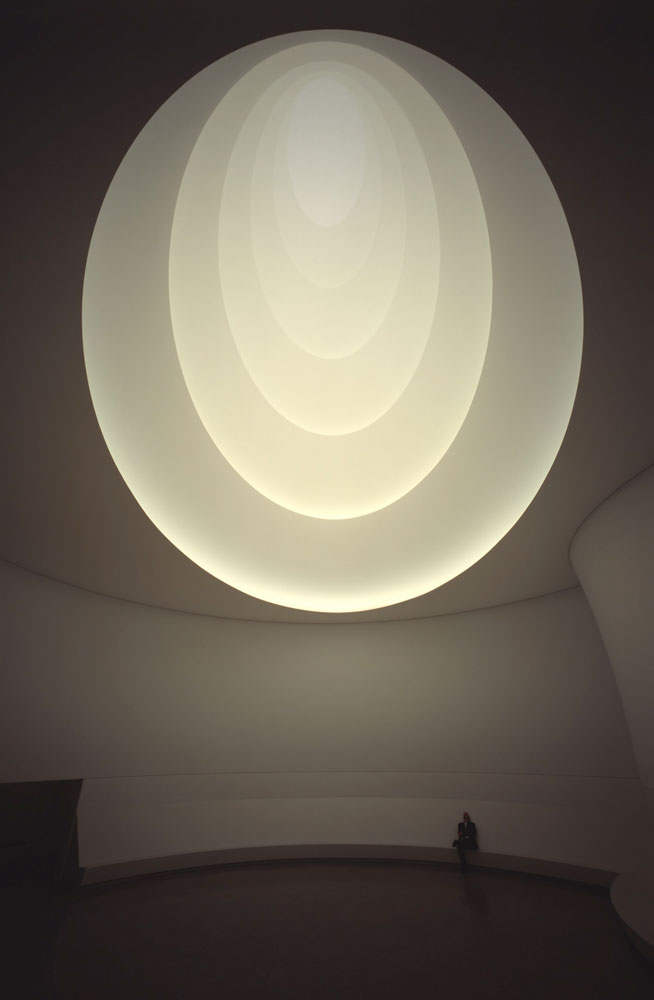 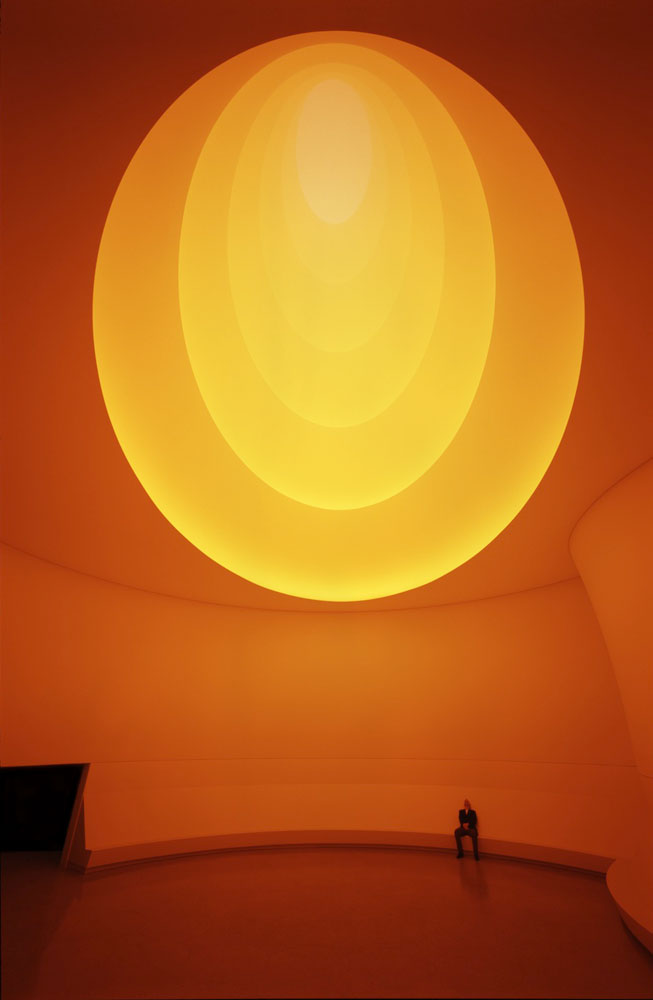 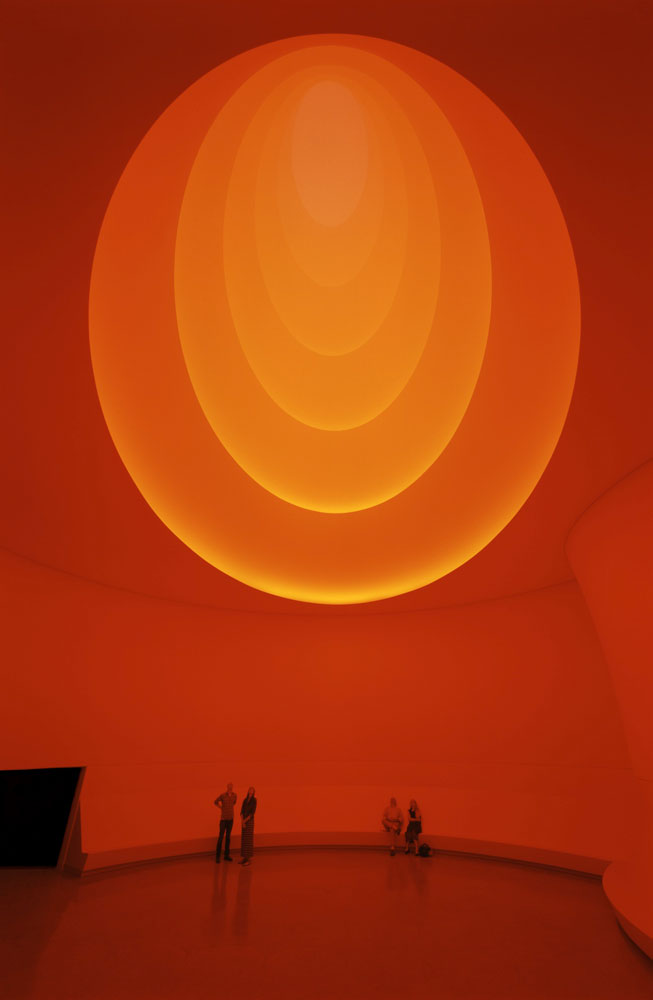 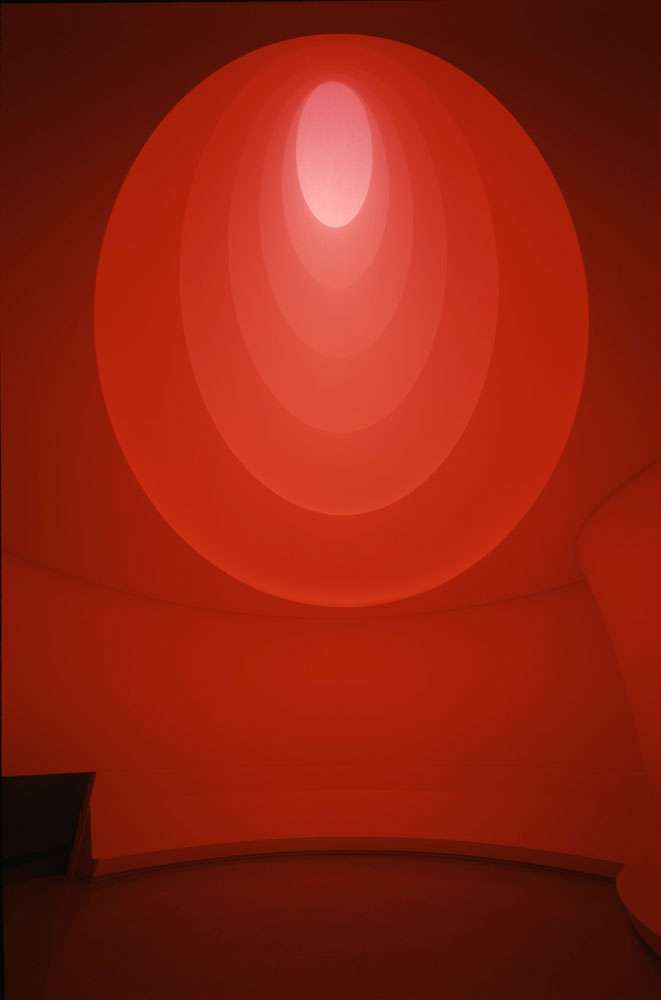 One of the largest installations the artist has ever mounted and the result of nearly six years of planning, Aten Reign will materialize the light and the air that fill the expanse of the Guggenheim rotunda. The work proposes an entirely new encounter with the building, as attention is drawn away from the boundaries of the built environment and toward the interior space, creating what Turrell has described as “an architecture of space created with light.” For the first time, the rotunda can be experienced only from below—not as an open void to be looked across, but as a mass of vibrant color that expands and contracts above the heads of visitors. 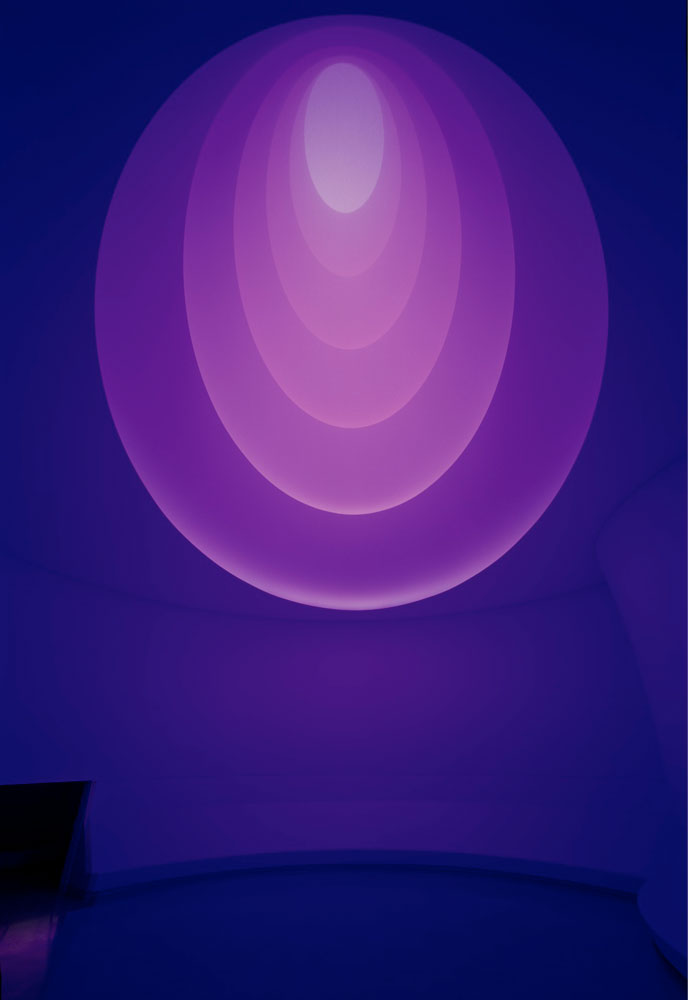 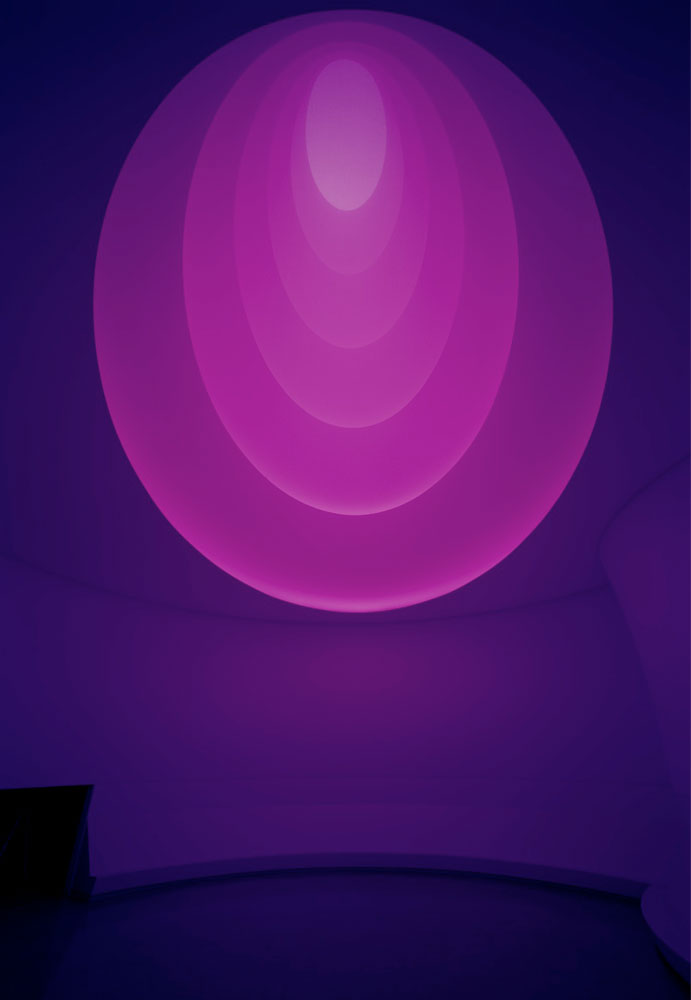 In Aten Reign, daylight enters from the museum’s oculus, streaming down to light the deepest layer of a massive assembly suspended from the ceiling of the museum. Using a series of interlocking cones lined with LED fixtures, the installation surrounds this core of daylight with five elliptical rings of shifting, colored light that echo the banded pattern of the museum’s ramps. As is typical of Turrell’s work, the apparatus that creates the effect is mostly hidden from view, encouraging viewers to interpret what they see by means of their own perception. The work promotes a state of meditative contemplation in a communal viewing space, rekindling the museum’s founding identity as a “temple of spirit,” in the words of Hilla Rebay, the Guggenheim’s first director and a pioneer in the promotion of nonobjective art. 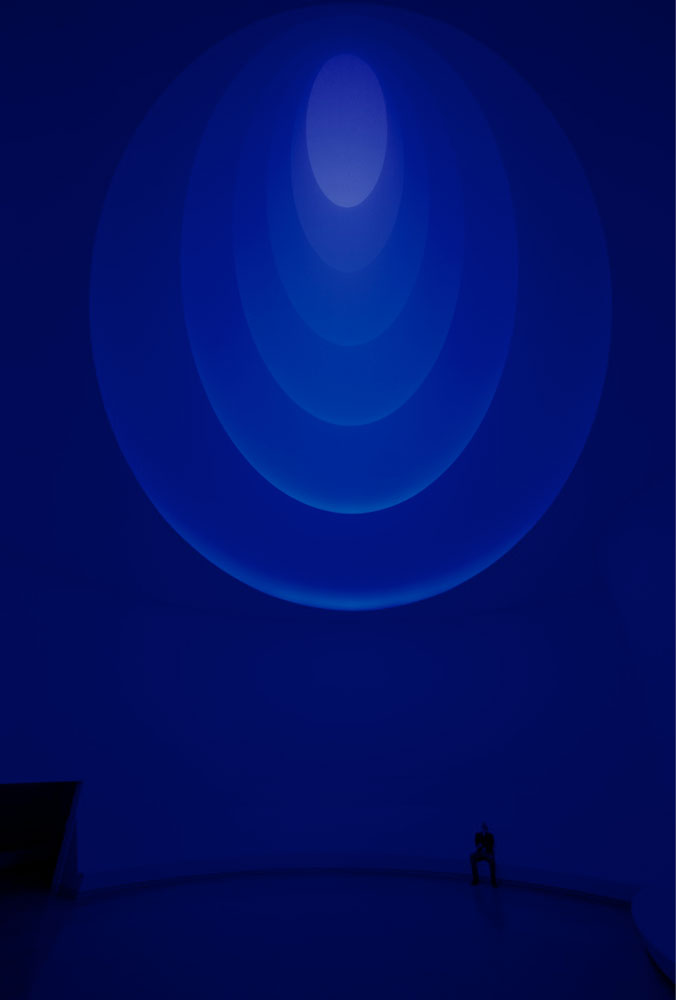 Aten Reign also relates to Turrell’s Roden Crater Project (1979– ), his magnum opus currently under construction in the desert outside Flagstaff, Arizona. When complete, the modified extinct volcano will house nearly two dozen separate installations, many carefully aligned with astronomical phenomena and all incorporating natural luminance. According to Turrell, the project was informed by the design of ancient observatories, which were oriented to celestial events. The Guggenheim itself echoes ancient architecture—Wright imagined it as an inverted ziggurat—and Aten Reign’s elliptical shape bears similarities to certain spaces at Roden Crater and Agua de Luz (an elliptical, stepped pyramid Turrell built in the Yucatan in 2012). Just as the natural world is an inspirational force for Turrell, so it was for Wright, who was fond of the open landscape of the American West, making his second home in Arizona. 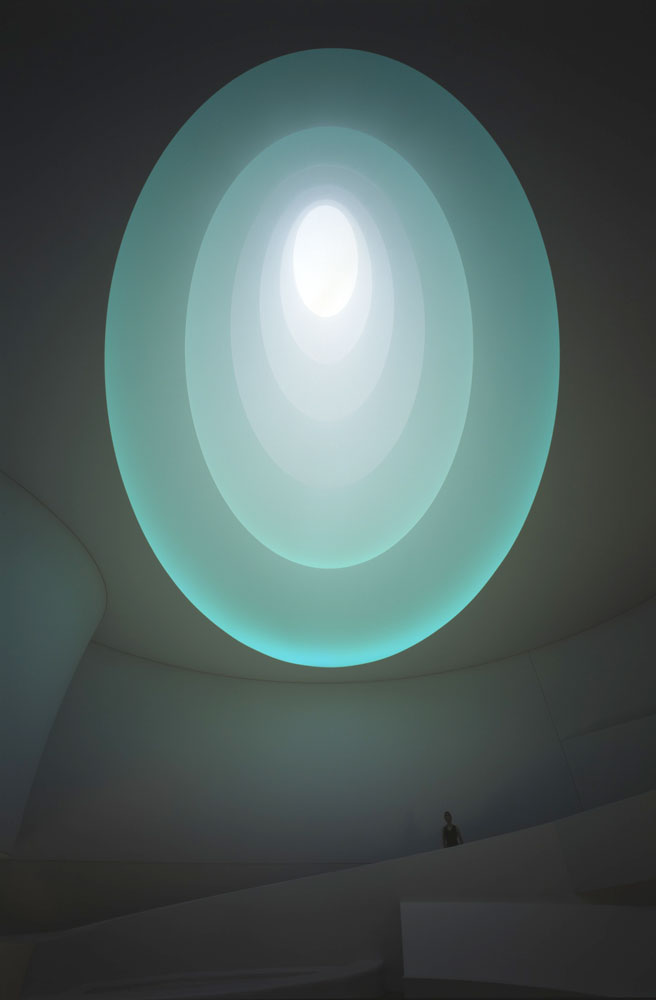 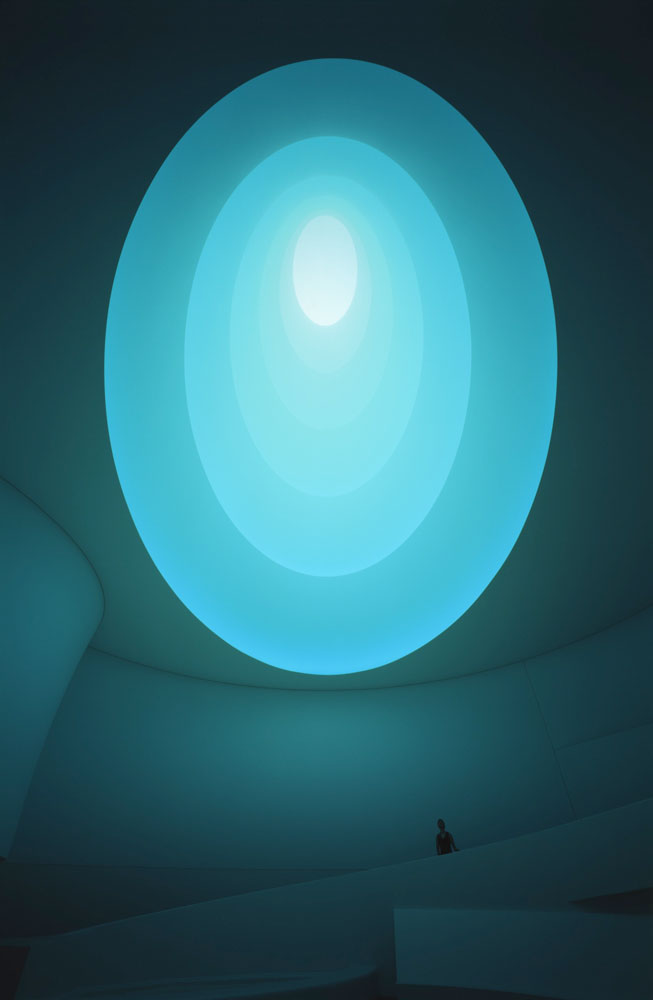 Offering a complement and counterpoint to Aten Reign is a selection of Turrell’s early works, some drawn from the museum’s Panza Collection and others on loan. These pieces offer a sample of the artist’s various installation types and link the new project to his work of the 1960s and 1970s. In Afrum I (White) (1967), one of Turrell’s earliest Cross Corner Projections, visitors encounter a glowing cube floating in the corner of a room; what first appears to be a solid object resolves upon closer inspection into simple planes of light. The Single Wall Projection Prado (White) (1967), on the other hand, seems to dematerialize space, dissolving the wall and creating a passage to an unknown space beyond. Alongside these projections, selections from the related etching portfolio First Light (1989–90) explore how the aquatint technique can invoke qualities of radiance. In the Shallow Space Construction Ronin (1968), light emanates from behind a vertical architectural fissure, appearing as a solid plane and dematerializing the darkened wall. Iltar (1976), one of his Space Division Constructions, creates an effect that may be read alternately as a flat panel of color hanging on a wall, a foggy void, or an opening into a separate chamber. These works connect Aten Reign to the artist’s earliest experiments with light and space and offer visitors a variety of perceptual experiences.

Born in Los Angeles in 1943 to a Quaker mother and a father who was a school administrator, James Turrell attended Pomona College, where his studies concentrated on psychology and mathematics. He later received a master’s degree in Art from Claremont Graduate School. Turrell’s work has been widely acclaimed and exhibited since his first showing at the Pasadena Art Museum in 1967, which established him as a leader in the nascent Light and Space Movement in Southern California. His work has since been presented at major venues including the Stedelijk Museum, Amsterdam (1976); the Whitney Museum of American Art, New York (1980); the Israel Museum (1982); the Museum of Contemporary Art, Los Angeles (1984); MAK, Vienna (1998–99); the Mattress Factory, Pittsburgh (2002–03); and the Kunstmuseum Wolfsburg, Germany (2009–10); and was included in the 54th Venice Biennale (2011). In addition to the exhibitions at the Solomon R. Guggenheim Museum, New York, the Museum of Fine Arts, Houston, and the Los Angeles County Museum of Art in summer 2013, Turrell’s art is on view in a solo exhibition at the Academy Art Museum, Easton, Maryland. The artist’s work is represented in numerous public collections including the Tate Modern, London; the Los Angeles County Museum of Art; the Museum of Fine Arts, Houston; the Solomon R. Guggenheim Museum, New York; and the Israel Museum, Jerusalem. Turrell has created more than seventy Skyspaces in the Americas, Europe, and Asia, with the first made in 1974 for Count Giuseppe Panza di Biumo at his home in Varese, Italy.