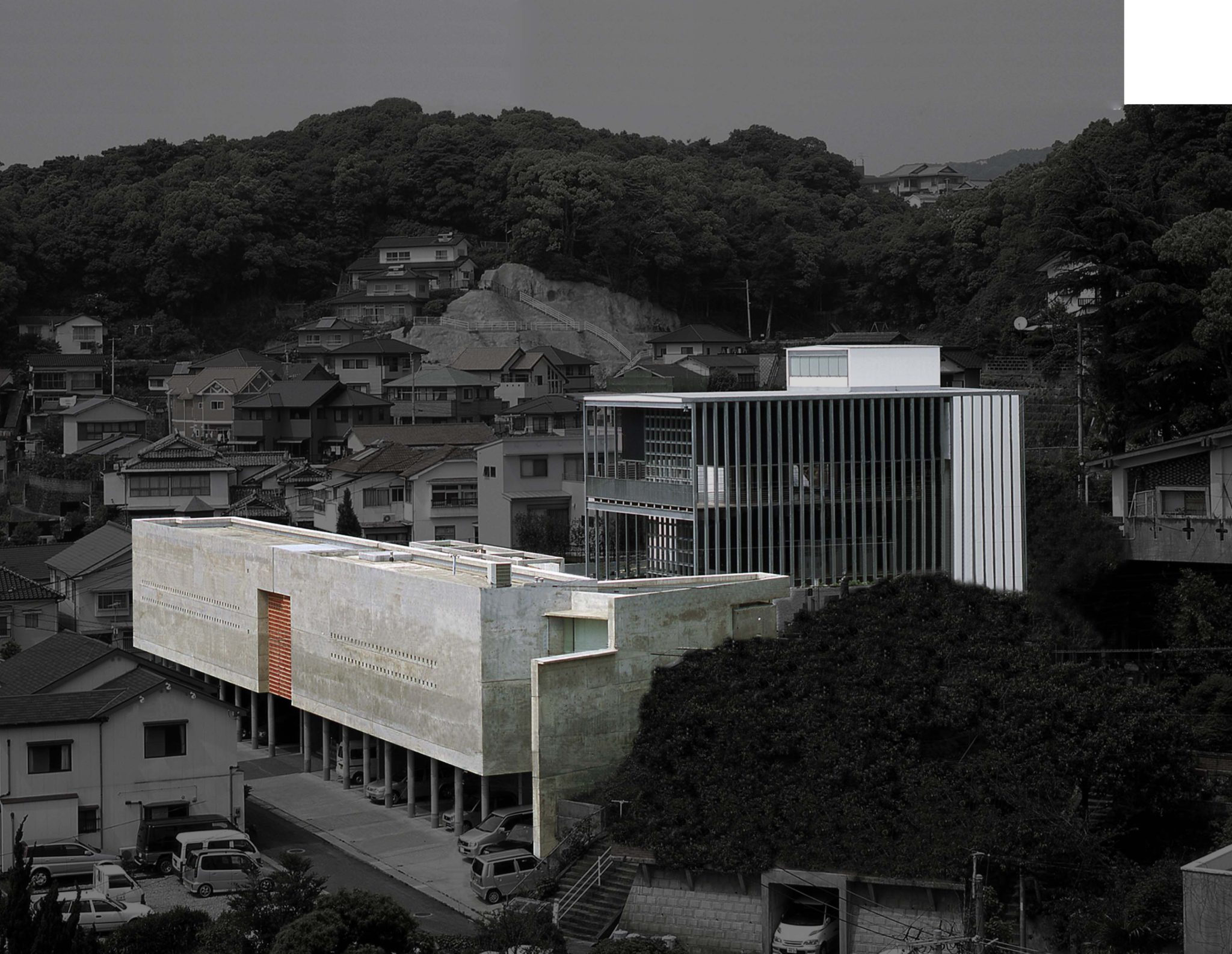 This project is a Buddhist temple and ossuary for the ”Jodo-shu”, a Buddhist sect. The site is located on a slope in Sasebo, Nagasaki, surrounded by a dense residential area. In addition, the ossuary, the temple premises and the residences are separated by ponds, and the reflection of the sunlight is thrown on the floor of the ossuary through the glass windows. Generally, temples of the “Jodo-shu” are planned to face east so that when praying at the main hall, the prayers would naturally face the Western Paradise (a paradise in the Jodo sect which is supposed to be located in the far west of our world). In contrast, due to the direction of the slope, this temple faces west. However, by adding a cinnabar-coloured finish to the inner part of the grid inset in the temple gate, and with the help of the light of the setting sun through the stairway and the temple premises, the stairway space, the temple premises and the main hall are all lit up in cinnabar. 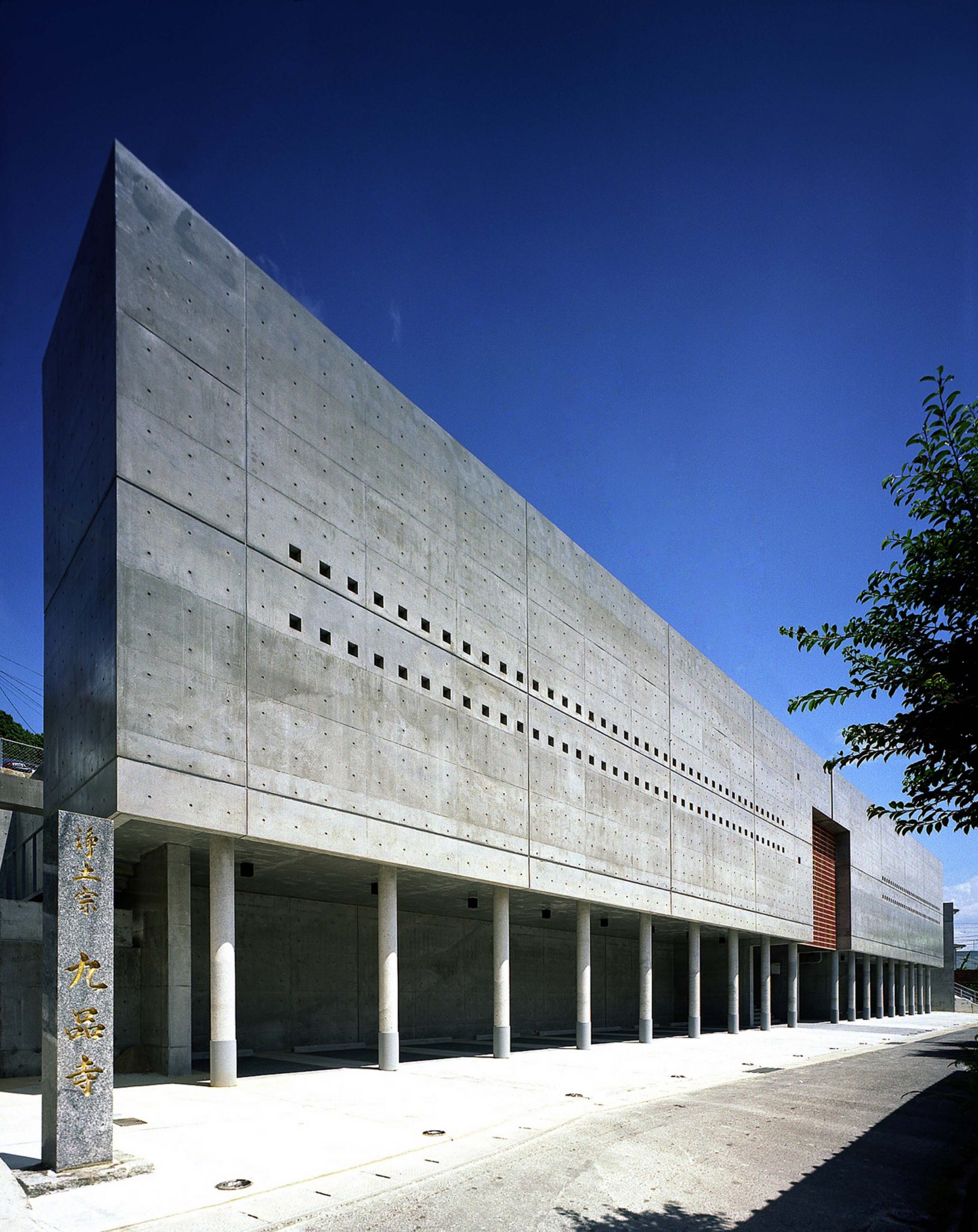 The whole design of the ossuary and the prayer hall is directed by Buddist beliefs, applying a contemporary vocabulary. Architecture here follows a narrative that gives sense to every axis, orientation, space, material and volume of the buildings. According to Buddist beliefs, the facade of the ossuary has to face West, the holy land, this way the holly light warms and consoles the souls in houses. The use of light follows this condition and is nevertheless used as an opportunity to provide a solemn atmosphere inside, a restful space for the ossuary. 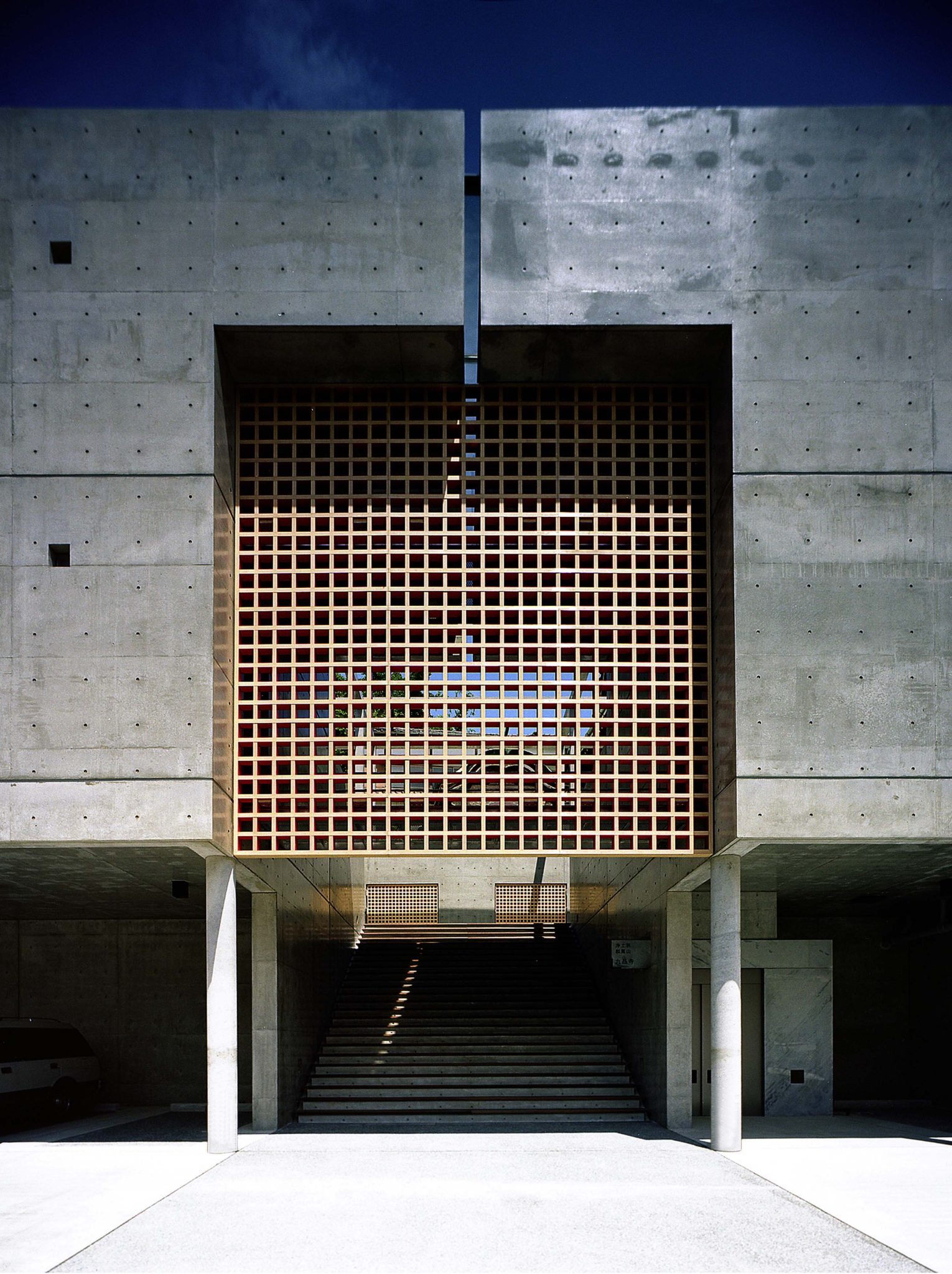 Building on the Slope

The existing graveyard was on a man-made terrace that was dangerously deteriorated. However, the temple was lacking funds. A reinforced concrete structure was proposed as a gate and an ossuary with 450 crypt spaces. 120 spaces reaccommodated the existing graveyard, and the rest were sold to fund the new main hall. In contrast to the concrete ossuary, the main hall is a light steel structure. In summer, doors of
the hall function to completely open the space to cooling breezes.
At the bottom of the site, a temple gate attached to a charnel house is arranged, and through this gate, a stairway would lead us up to the temple premises. The main hall of the temple is planned at the front of the premises, and on both sides of the premises, the residences for the chief abbot and vice-chief abbot are arranged. However, as these residences are hidden by wall partitions, no one could notice the dwellings from the temple premises. 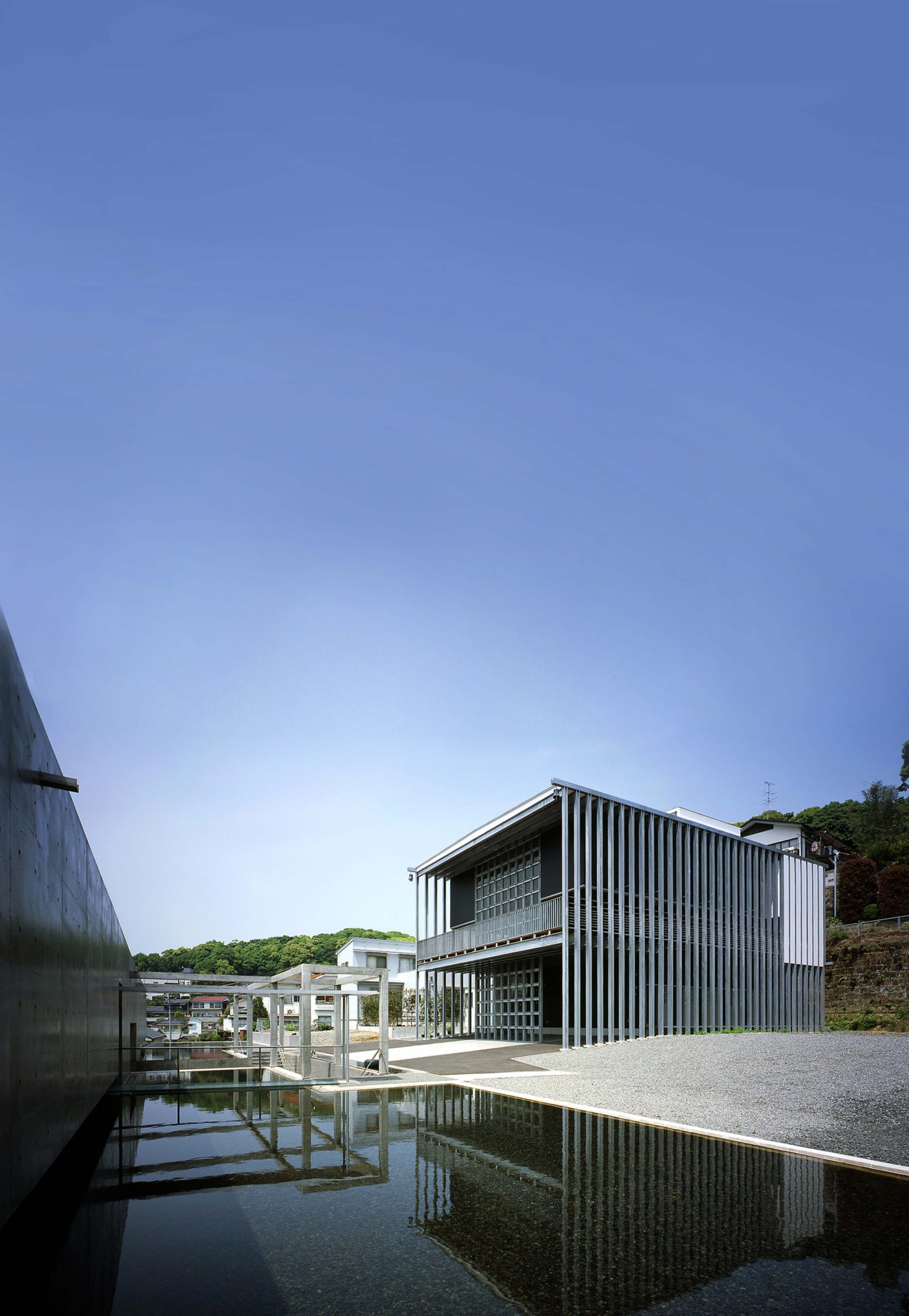 The pond is a spiritual element. It is a symbolic separation between this world and the next. The ossuary, the temple premises and the residences are separated by ponds. The reflection of the sunlight is thrown the floor of the ossuary through the glass windows. 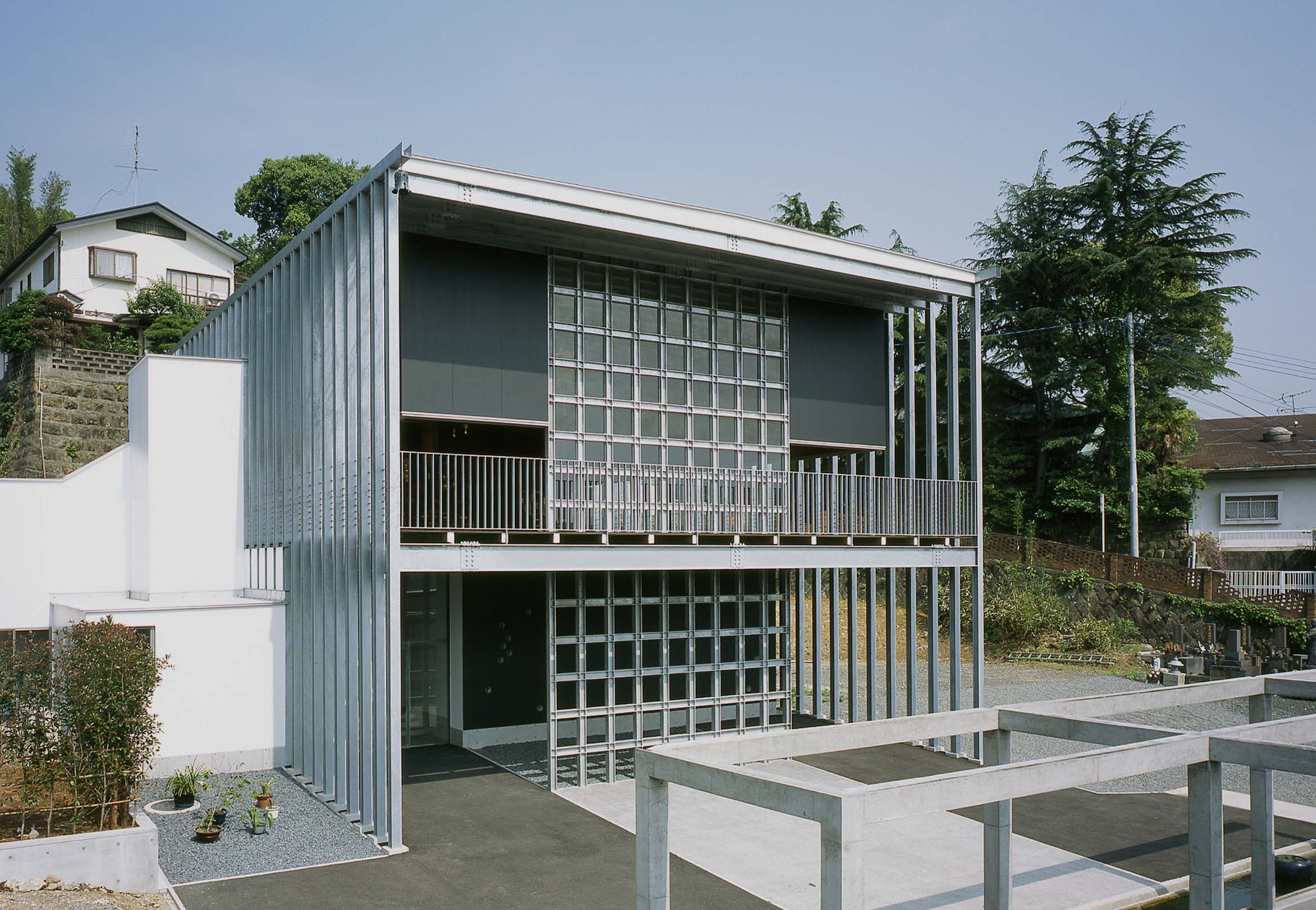 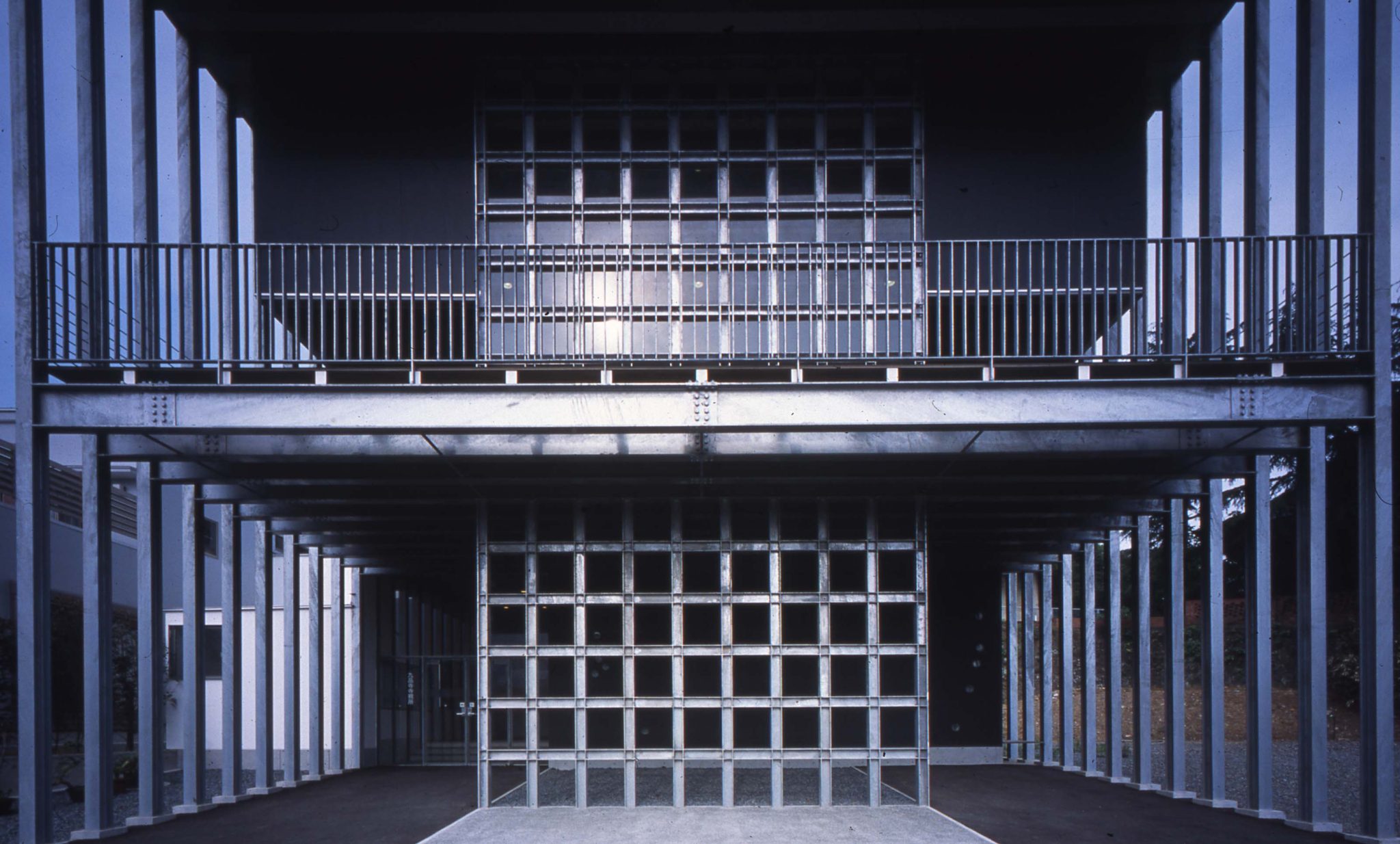 The location of the temple was carefully studied to take advantage of its high position on the hill and make use of natural ventilation for cooling the space during summer time. The space was designed adopting an idea from traditional Japanese houses: the engawa, a veranda with shoji screens (sliding doors made of paper) behind. 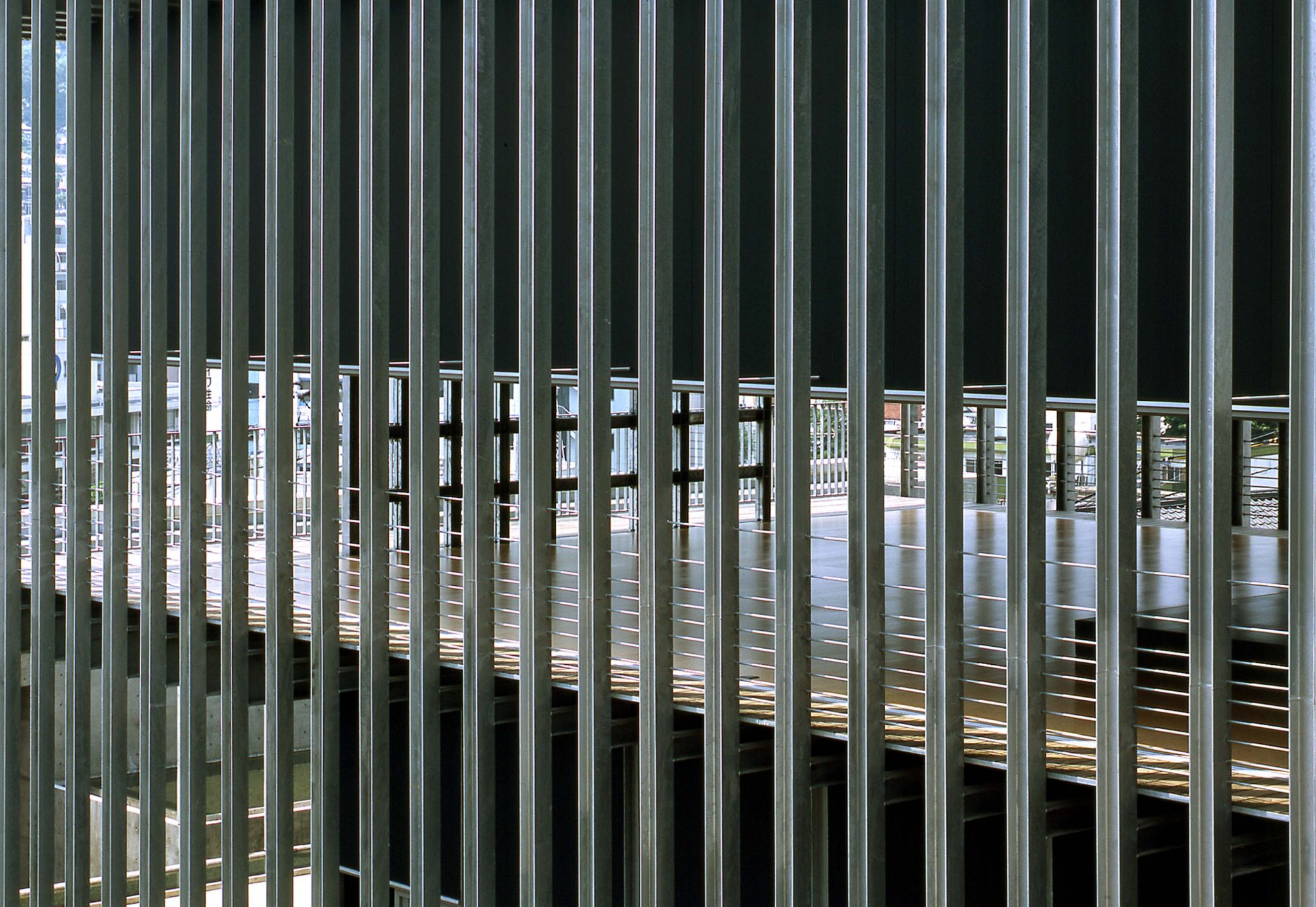 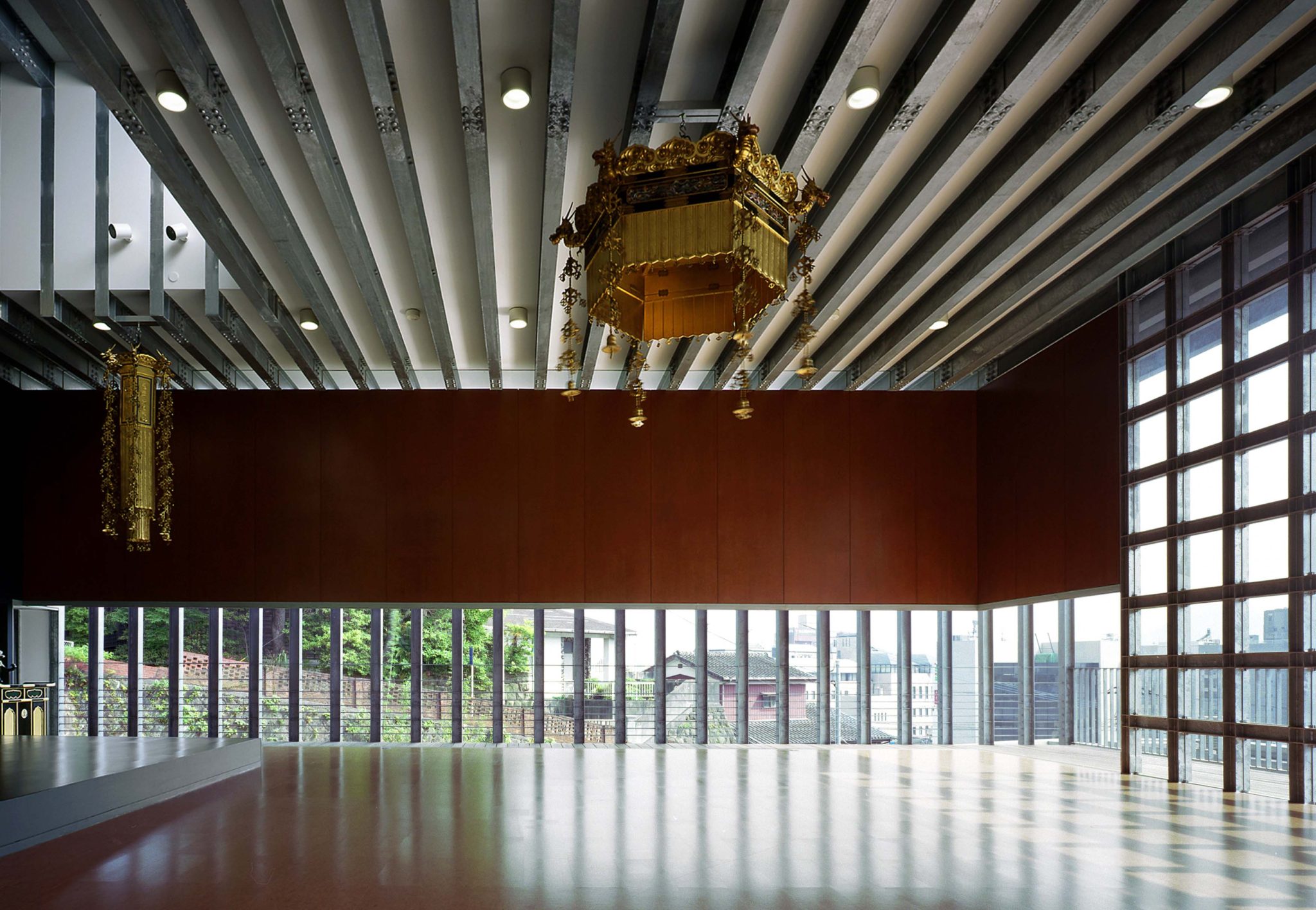 Kuhon-ji Buddhist Temple in Nagasaki by Furuichi and Associates.