A mixed-use program of office and retail, with private residences above, define the Blumenhaus. The building is an integral component of a larger effort by the city of Zürich to rebrand its Escher-Wyss district through a metamorphosis of new development, including green spaces, bikes lanes, and a plethora of new housing. The district is characterized by its industrial heritage, and palette of raw concrete, burgundy brick, and rusted steel; it is bounded to its north by the Limmat River, and to its south by the entanglement of railway tracks that lead to the city’s main train station. Blumenhaus is adjacent to a former ship-building hall–or Schiffbau, in German–of Escher Wyss & Cie., an industrial company that was absorbed by another in the twentieth century; its expertise was turbines and electrical engineering. When the company left this location, the area began to decline in its industrial prominence, opening a path toward its redevelopment. Yet, some industry continues to inhabit the district, enabling a confluence of gastronomic, commercial, service, and other residential-supporting businesses to further define this once neglected area, just north of Zürich’s old city center.

When Escher-Wyss is juxtaposed against the city center–which abuts Lake Zurich–industrial relics dominate; yet it is intertwined with the center, by the Hardbrücke railway station, in tandem with numerous trams. Stealthily slipping into this ‘rough’ yet regenerating urban context, Blumenhaus’ façade is finished with enormous matte-aluminum panels, nearly each of which is punctuated by the silhouettes of hibiscus flowers, and inversely, reliefs of the same patterning. These custom-designed, and ornament infused panels were crafted through an industrial process of ‘stamping’ the patterning through, or imprinting it onto, the aluminum, by sheet-forming and cutting; a process that involved metal-workers. The panels’ matte finish–and hibiscus flower silhouettes–lessens the lust of their shine, which allows their scale to recede when seen from afar, or at street-level. As the building ages, the oxidation process will add a weathered appearance to its exposed façades, allowing it to ‘age’ along with the area’s already ‘aging’ relics. Blumenhaus’ materiality, thus acknowledges its context’s storied industrial past, yet its incorporation of technology is readily apparent, only upon second-glance.

Blumenhaus’ ground floor façade is free on three sides, which maximizes street-facing frontage, and ensures the ground and first floors remain flexible. The west façade abuts an adjacent housing building, at an acute angle, which enabled the creation of the parking garage entry along the northern façade; it slightly curves as it descends, allowing the inversely curved space at ground floor, to function as the residents’ entry point. Accordioned matte-aluminum panels, ‘punched’ with the same hibiscus flower silhouette at high density, enable physical security for the building’s inhabitants, by acting as a gate, while allowing visual permeability. Numerous cloverleaf columns are to be found throughout the interior, echoing exterior ornament; a spiraling concrete staircase swirls from the parking garage to the first floor. The top five floors contain 23 units, all rental apartments oriented in at least two directions–each with a north-south orientation, or an exposed corner–with most having access to natural light along the southern façade. Loggias wrap the Blumenhaus’ three free façades, which function as balconies. Four units of the top floor have staircases that lead to individual, generously sized private roof terraces; floor to ceiling glazing and oversized opening elements prelude exterior spaces, thus enabling ‘loggia living’. 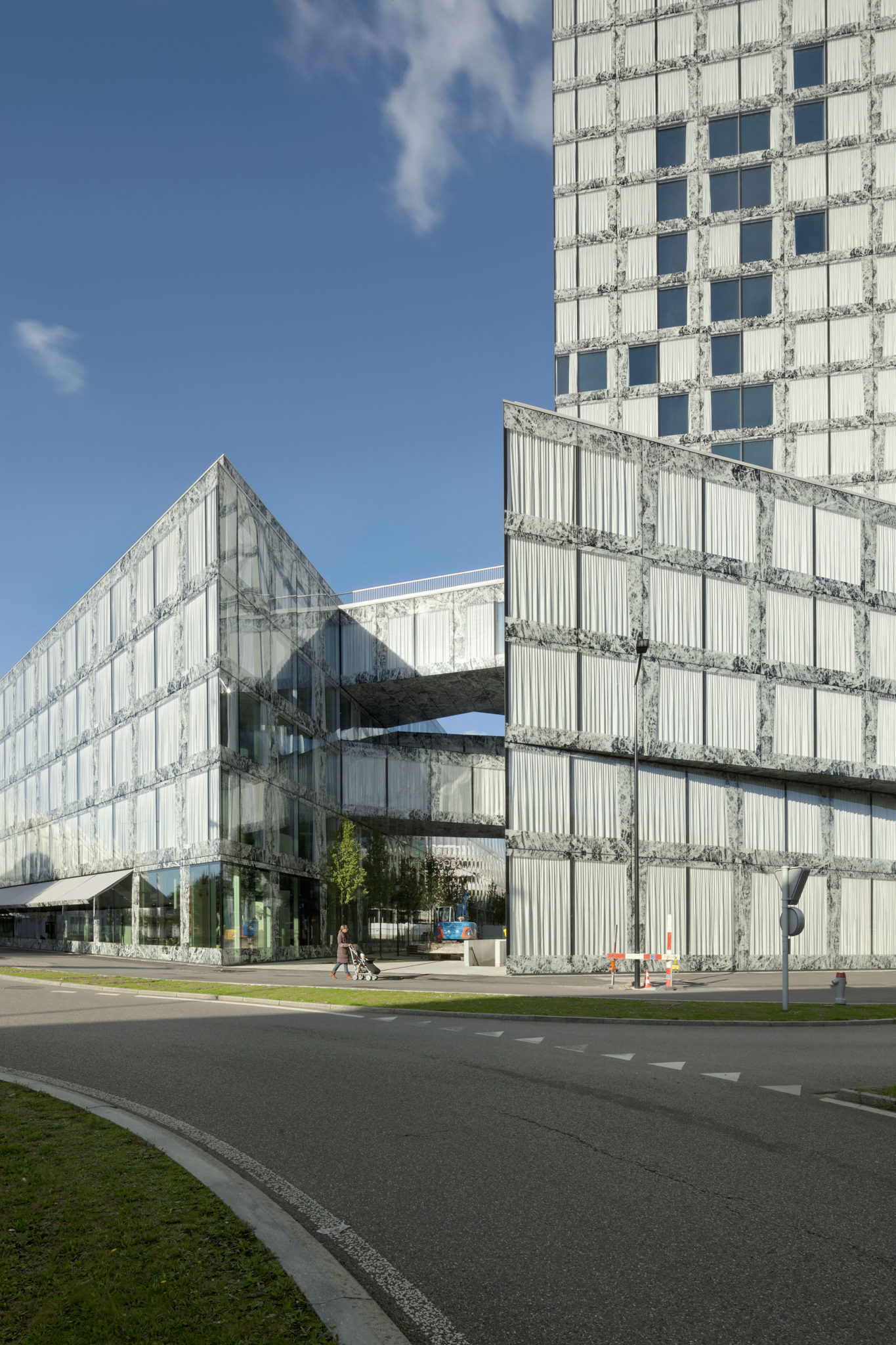 Wiel Arets Architects (WAA) is a globally active architecture and design firm, whose work extends to education and publishing, with studios located in the Netherlands, Germany, and Switzerland. Comprised of an international team of architects, designers, thinkers, and administrators, the firm is currently involved in large number of projects throughout Europe, North America, Asia, and Africa. Its architecture and design emerges from research and a balance of hybrid-programming solutions, which adapt to and anticipate future contextual change.
FOLLOW
MESSAGE

Blumenhaus is a mixed-used building located in the Escher-Wyss district of Zürich, whose matte-aluminum façades’ ornamentation playfully recalls silhouettes of hibiscus flowers.