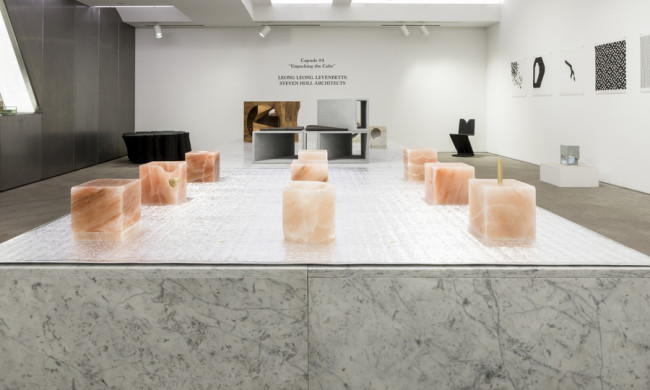 CHAMBER is pleased to announce their first exhibition in 2016, Capsule #4: “Unpacking The Cube,” presenting works by LEONG LEONG, LEVENBETTS, and STEVEN HOLL ARCHITECTS. The exhibition will open Thursday, January 21st.

Andrew Zuckerman, curator of Collection #2 “Human | Nature” in collaboration with Chamber, approached three architecture studios, each at different points in their professional trajectories – LEONG LEONG, LEVENBETTS, and STEVEN HOLL ARCHITECTS – prompting the architects to reach into the conceptual roots of their practice and convey them via physical objects for the exhibition space.

The results of their inquiries approach the idea of fundamentals from different perspectives, focusing on social exchange, spatial concerns, and conceptual experimentation. In distinct ways, their proposals depart from and adapt the essential form of the cube, and propose different answers to the question of whether and how it is possible to collect architecture.

For Chris and Dominic Leong of LEONG LEONG, the collection of objects are an exploration of architecture’s potential to connect the individual to the collective. The nine objects, fabricated with advanced techniques by QUARRA STONE and composed of pink cubic Himalayan salt blocks, are meant to prompt both individual introspection and communal contemplation. Together, they form a “Toolkit for a Newer Age,” a set of objects that fulfill basic human needs while remaining in some ways monumentally abstract.

Stella Betts and David Leven of LEVENBETTS developed “not to scale.” Based on a hollow wedge-shaped building block—a re-conceiving, perhaps, of the proverbial building block, the cube—“not to scale” is based on the idea of “utter scalability.” The concept was born out of their inquiry into strategies of aggregation, in addition to their interest in prioritizing access to light and an outside view when shaping physical spaces. Multipurpose and adaptable, “not to scale” can operate in landscapes, in cities, and as part of housing structures, but is also adaptable for interior furnishings like seating structures and shelving.

STEVEN HOLL ARCHITECTS presents concrete, aluminum, walnut, and 3-D printed objets d’art. Developed as part of Holl’s architecture think tank/lab “Ex of In,” or “Explorations of In,” the sculptures are the result of an investigation into “what is possible in architecture,” reconsidering architecture as an art and questioning its ongoing potential for shaping public space and social openness. The series has cubic form at its origin, presenting explorations of the overlapping of positive and negative space of spheres, cubes, and tesseracts.

While their physical proposals vary greatly, a common thread runs through STEVEN HOLL ARCHITECTS’ “Ex of In” sculptures, LEVENBETTS’ “not to scale,” and LEONG LEONG’s “Toolkit for a Newer Age.” Functional both as collectible sculptures and as prototypes for larger structures, their inventive forms, at their most basic, articulate answers and generate questions about the connections between our abstract understanding of space and form, and the practical ways in which people inhabit and interact with architecture.
http://chambernyc.com/collections/capsules/objects