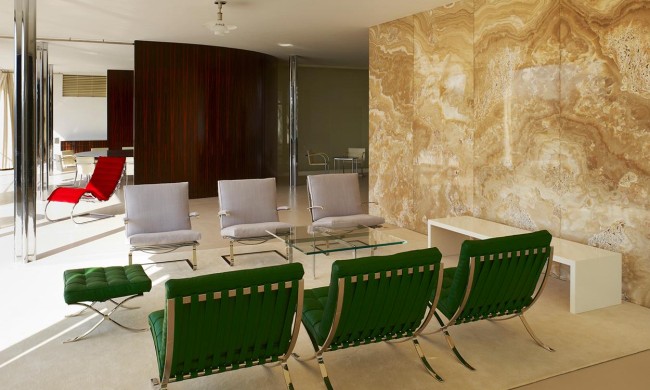 Villa Tugendhat in the Czech Republic is the most well-preserved example of the German-American architect Ludwig Mies van der Rohe’s early functionalism. It is regarded as one of the world’s most important manifestations of villa architecture and has been listed as a UNESCO World Heritage Site. The building also likely inspired the Norwegian architect Arne Korsmo’s work on Villa Stenersen.

Mies van der Rohe (1886–1969) designed Villa Tugendhat in 1928–30 on commission for Greta and Fritz Tugendhat. The Jewish couple and their three children had to flee Brno in 1938. The villa was significantly altered both during and after the Second World War, but it has recently been restored in accordance with the architect’s original concept and ideas.

A house with a panorama view
In 1928 Mies van der Rohe visited Brno, a thriving industrial town that already by the 1920s contained several functionalist buildings. The visit aroused the architect’s enthusiasm, and the Tugendhats managed to persuade him to design a house with a panorama view for them. This led to a close collaboration where Mies was given free rein to design both the house itself and the interior decoration.

Interior decoration and furniture
In creating the interior decoration and furniture for Villa Tugendhat, Mies was aided by his associates Lilly Reich, Hermann John Hagemann, and Sergius Ruegenber. A unique feature of the interior is the onyx wall and the semi-circular wall of Macassar ebony that frame the dining room in the otherwise open space. The Glass Room, as the living room was called, opens up towards the panorama view and the garden by way of three-metre-high window panes. The villa’s custom-made furniture includes the so-called Tugendhat and Brno chairs.

An inspiration for Arne Korsmo
Ludwig Mies van der Rohe’s early functionalism seems to have inspired the Norwegian architect Arne Korsmo, who designed Villa Stenersen on commission for the noted art collector Rolf Stenersen. There are several similarities between the two houses, such as their floor plans and construction and material choices. The most eye-catching resemblance is the large glass room on the main floor of each house. Arne Korsmo also opted for unconventional materials such as Belgian marbrite glass, Italian terrazzo, glass bricks, and large glass panes both in the interior and in the façade. Korsmo wanted to fulfil Stenersen’s request for creating space and lighting suitable for a large art collection. Mies van der Rohe for his part believed that the architecture and the materials were art in themselves, so that only a single work of art was commissioned for Villa Tugendhat – a female torso made by the German sculptor Wilhelm Lehmbruck.

The exhibition recounts the history of Villa Tugendhat and documents the extensive restoration work carried out in the period 2010–2012.

In cooperation with the Jewish Museum in Oslo and the Brno City Museum.